Here is a real-life unsung hero, used throughout the Third World as an all-purpose, go-anywhere, tough little son-of-a-bitch that is always overloaded, often driven flat-out, and generally thrashed to within an inch of its life on a daily basis, even in its fourth decade. If John McClane was a car, he’d be a Nissan Vanette. 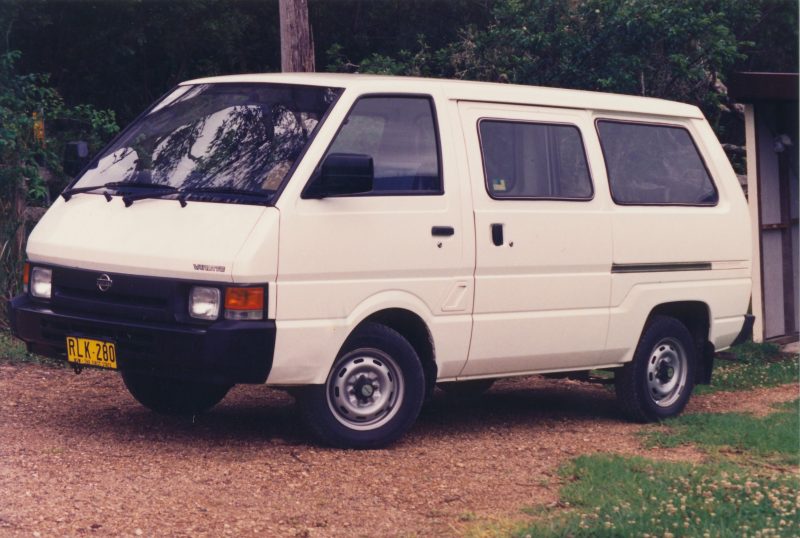 The second-generation, or C22, Nissan Vanette started life in 1985 but was so perfectly pitched that it managed to stay into production until 2010. Yet even its eventually death wasn’t the end; the Vanette’s simple and robust mechanicals still form the basis of the Ashok Leyland Dost.

Which might lead you to the not unreasonable conclusion that the Vanette is a Third World phenomenon. And you’d be right; it was sold in the United States between 1987 and 1994 but even four safety recalls couldn’t cure it of its unfortunate habit of spontaneously combusting at inopportune moments. 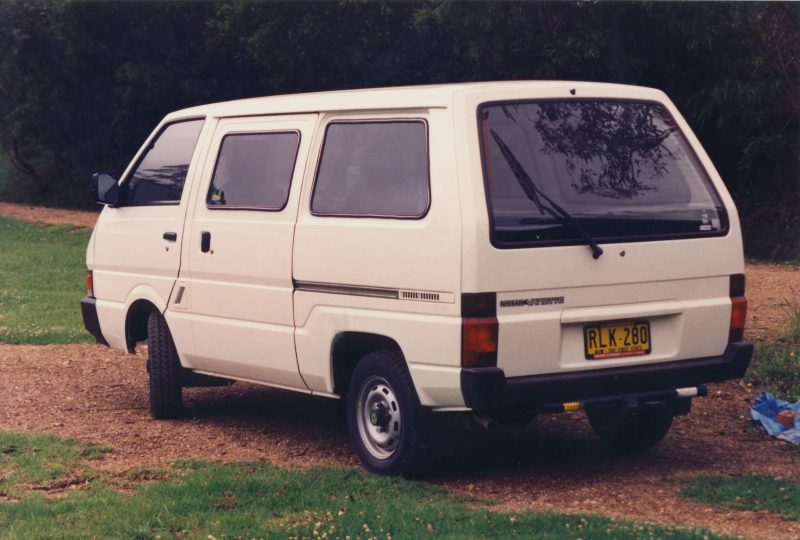 This was a consequence of the rushed installation of a larger 2.4-litre engine, which resulted in a cramped engine bay that left too little room for effective cooling. In a piece of irony that even Alanis Morrissette wouldn’t have dared imagine, ‘Murica’s insistence on having their Vanette’s air-conditioned led to the fiery death of dozens of the vehicles. Nissan ended up offering to buy back every single van to forestall a class action.

Some owners held out and hung onto their treasured cars, but most were only too happy to accept the generous terms they were offered, which was good news for them, but a less happy result for the vehicles, which were crushed. 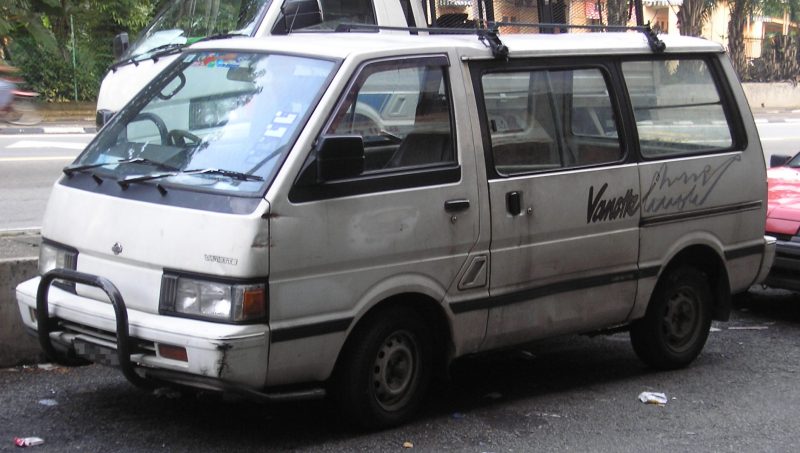 A robust 1.5-litre petrol engine provided 80bhp of propulsive effort, which isn’t much but it did offer it up very reliably, even when fed a diet of poor-quality fuel and indifferent maintenance.

The five-speed gearbox is similarly robust and capable of shrugging off all but the most inept attempts to synchronise it with the clutch and gear change. We, as nice middle-class folk, might look at terms such as a gear-change’s weighting and hand-feel but the target market demanded only tolerable accuracy and huge longevity. They got both. 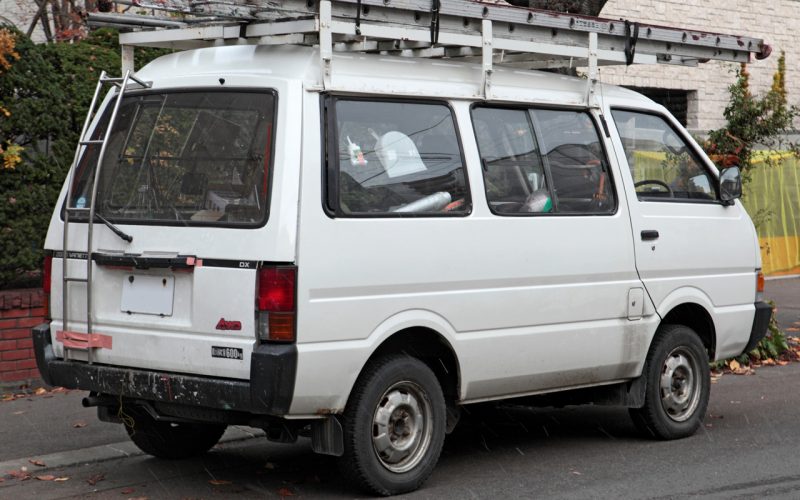 They also got leaf springs, which we might snootily (and accurately) dismiss as pre-Industrial engineering, but they’re cheap, tough, and easy to service and repair, all of which are way more important than ride comfort or on-the-limit handling when you’re six hundred miles from the nearest garage.

The front disc brakes add an element of late-twentieth-century sophistication, even if the rears are good old-fashioned drums. 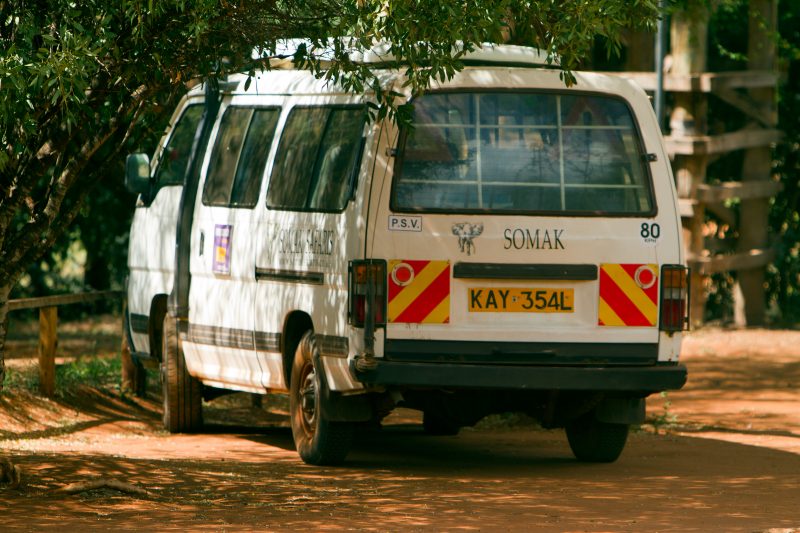 The Vanette as a safari bus

My western-centric assumption was that our Kenyan safari vehicle would be a Land Rover, a Toyota SUV, or a four-wheel-drive minibus. What we ended up with was a two-wheel-drive Vanette and you know what? It was terrific.

It isn’t luxurious, let’s be clear. The trim on any Vanette is pretty crappy and I have never, ever seen one that has matching seats. Nor does it have air-con and even if it did it would have to battle door seals that are so poorly designed that brick-red dust, as fine as talcum powder, is drawn through them settling on the interior and its occupants until they are uniformly dusty. So vast was the quantity and so fine the particles that I am still finding it inside my luggage five years later.

The snorkel, fitted to try and draw in what little clean air is available probably does make a difference, but Alfie, our guide and driver, still removes the air cleaner every night to bang the dust out of it across his leg. 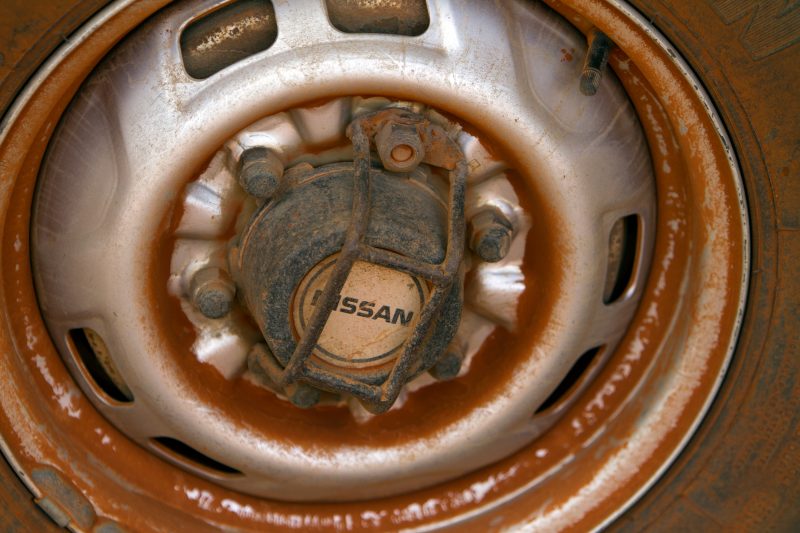 When my Vanette rolled off the production line twenty years ago it probably wasn’t destined to go straight to East Africa, but that’s where it ended up. It seems happy enough and in rude good health; sure, they’ve had to reinforce the door mirrors and fit brackets to stop the front and rear windows popping out, but that, along with the installation of homemade hub and sump guards, is all that’s required. Which is remarkable for a vehicle that was originally designed to cope with nothing more testing that the odd urban kerb.

Driven long and hard the Vanette bounces over deeply rutted roads, down dry river beds, over fallen branches, and alongside sleeping lions with equal aplomb. “I service it after every trip”, Alfie smiles, “but apart from that I do nothing. It’s a very reliable car.” 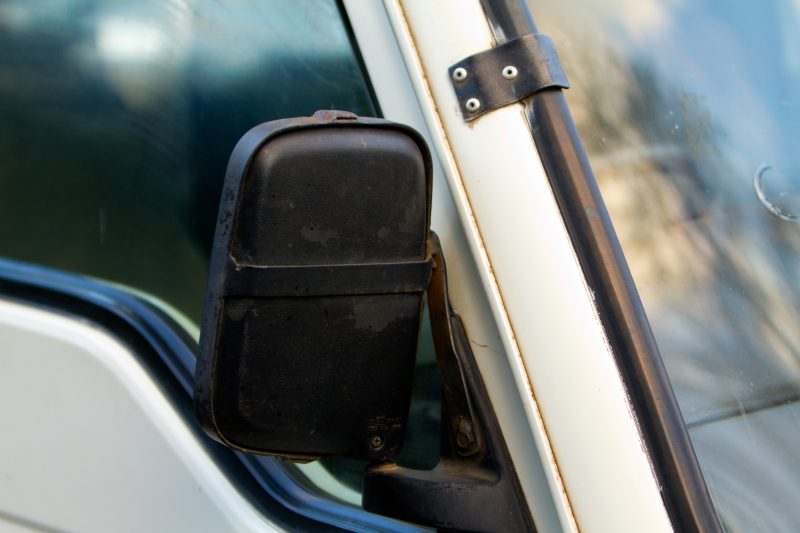 Yet the most remarkable thing about our first journey wasn’t the Vanette, or even the animals. It was Alfie’s driving. Kenyan’s should drive on the left, just like the Brits, but the reality is that they drive wherever the road is smoothest. This calls for frequent, violent lurches from one side of the road to the other, in a desperate quest for a flat, pot-hole free section – and if Alfie does spot one he doesn’t let the fact that a lorry is already using it stop him, so you can imagine the short-shrift that pedestrians are given.

Like every other driver, he spends a lot of time blowing his horn too, yet there is no aggression, no fist-waving, and no shouting. Road rage is unknown here, even from people forced to jump out of the way to avoid being run down. It’s remarkable and humbling; it’s uncomfortable to watch people being treated so badly in favour of wealthy middle-class tourists travelling in a beaten-up minibus.

Alfie drives well, shifting down smoothly with a neat little double-declutch and then short-shifts his way back up the ‘box, albeit a little earlier than you or I might think prudent; think late-night mini-cab driver but without the grumpiness or the feau orange air freshener battling to hide the smell of stale vomit and cheap aftershave. 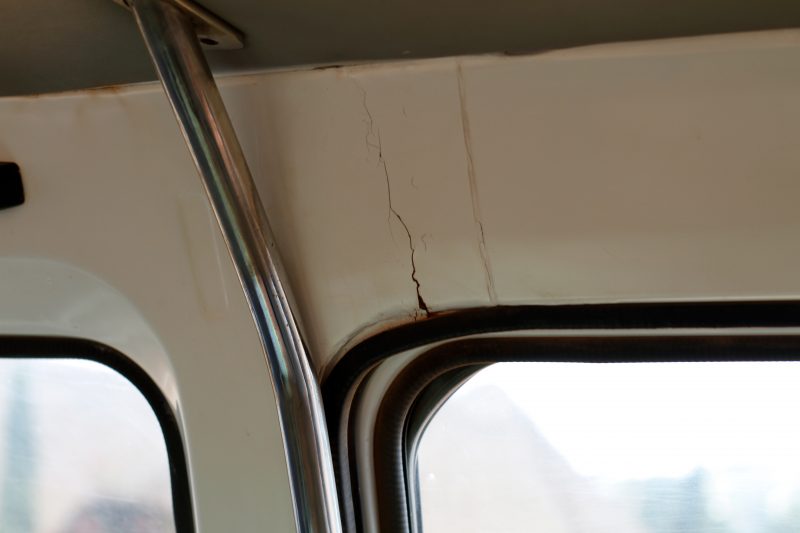 He’s quick too, gunning the little Nissan’s engine like his life depends on it, which is in stark contrast to his usually laid-back demeanour. He rarely slows down, conserving what little momentum we have; the downside of this is that he frequently overtakes other vehicles on blind bends.

No one minds but us, and other vehicles often pull over into the gutter to help him past, leaving their lorries canted over at alarming angles. We are waved through police checkpoints, urged across to the wrong side of the road to avoid the long queues. “They know that I am a tourist guide, so they let us through. Tourism is good for Kenya, so I am treated like a king.” Alfie laughs – Alfie laughs a lot – and urges the minibus on to ever higher speeds.

It’s noisy inside, as well as dusty. Part of the din is from the ancient 1.5-litre engine – practically mid-mounted and very low-geared – but most of the cacophony is from the trim. It rattles and bangs and shuffles about restlessly. More worrying is the way in which the door aperture flexes independently of the door. I put my finger in the frame, tight against the door seal and feel my finger getting pinched rhythmically; the stress-crack that extends diagonally across the frame of the door opens and closes as we crash over the road’s corrugations. It doesn’t seem to get any worse, even though I keep a close eye on it over the coming days… 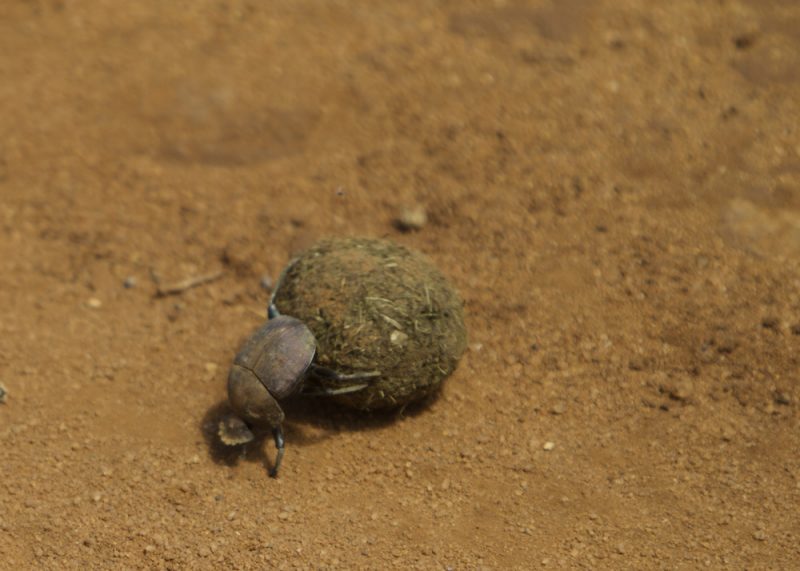 Eight hours later – Africa is a big country, much bigger than it appears on most world maps; the top half alone could swallow the United States and the whole of Western Europe, with plenty of space left over for Argentina – we finally dart off the main road and slow down. Alfie picks his way through washed-out roads and over fragile wooden bridges; speed now would kill the minibus in minutes, yet he has no need of four-wheel-drive even if he would like it.

“Land Rovers are good, but very expensive and I could never hope to buy one. Anyway, you don’t need them here. Well, only when it rains.” This is the end of the rainy season and the damage that the torrential rain has done is everywhere. Roads are newly-surfaced, and trees lie fallen in places, victims of soil erosion rather than high winds. The dust isn’t too bad now, away from the main roads, and the vegetation is emerald green, lush and abundant. It feels fresh and vibrant, but then Africa often feels that way at either end of the day.

Alfie skids to a halt and throws the ‘bus into reverse. “Look”, he says, “a dung beetle.” He points to an almost invisible beetle pushing a mound of dung along. “That’s why we’re forbidden to drive over dung”, he explains, “in case any insects are killed”. Ah, that explains the occasional random lurch from one side of the track to another. No juvenile squashing of turds for Alfie, a restraint that I’m not sure I’d be able to demonstrate; I can’t help thinking that a decent pile of elephant poo would flatten in a very satisfying way when hit by a couple of tonnes of minibus at speed… 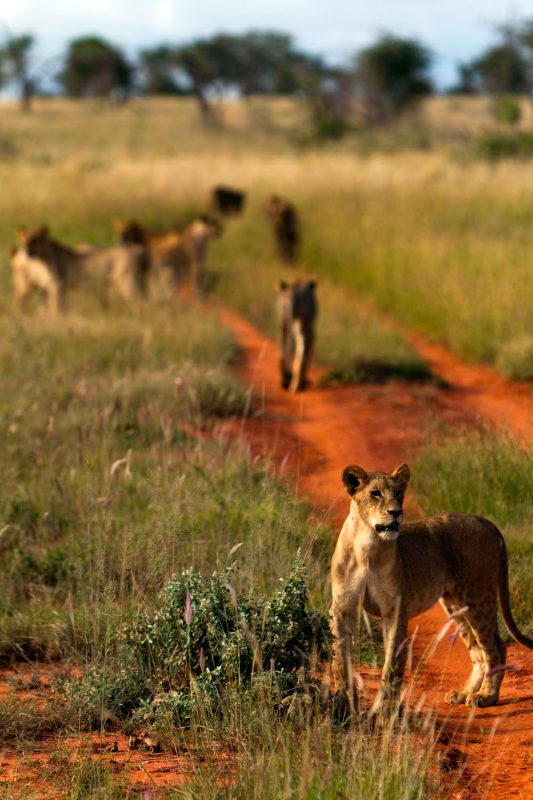 We rise early the next morning for a dawn safari drive. Alfie had politely declined our invitation to join us for dinner, preferring to eat alone. I don’t know whether that is because he doesn’t like us, or whether he prefers to eat alone, or whether he is just maintaining a professional distance, but I can’t help thinking that we probably missed out on some good stories; there’s a twinkle in his eyes that makes us suspect he’d be good company over a beer.

Speculation about our driver’s love life is cut short by the sight of a pride of lions. The roof has already been raised and it is impossible to resist bracing yourself against the padded sides to get a closer look. The air is cold, and I shiver despite my fleece, but as I fire off dozens of frames I am lost in the mood of the moment. They ignore us most of the time, and when they don’t they just look bored, and yawn. The Nissan Vanette is a common sight for them, too.

Alfie keeps his distance from the pride and picks his way across the plains in search of more to see. He rarely ventures away from the tracks, but this is in the name of conservation, not comfort because the roads here are narrow and rutted and more poorly surfaced than the surrounding plain.

The day’s tally ends with cheetahs, lions, elephant, giraffe, hippo and more different monkeys and birds than you could ever count. Alfie’s eyesight is phenomenal and is frequently shouts out that he has seen something and then has to drive for a couple of minutes before our city-tuned eyes can see it. Everything, not matter how large, is camouflaged to perfection here; if you’ve never seen a 20-foot giraffe disappear before your eyes that might be hard to comprehend.

Elephants though, never blend in. They march across the landscape looking even more alien than they do in a zoo. They’re warier than the lions too, thanks to the presence of their young and we suffer a mock charge that serves to remind me that structural rigidity probably isn’t one of the Nissan’s strengths. 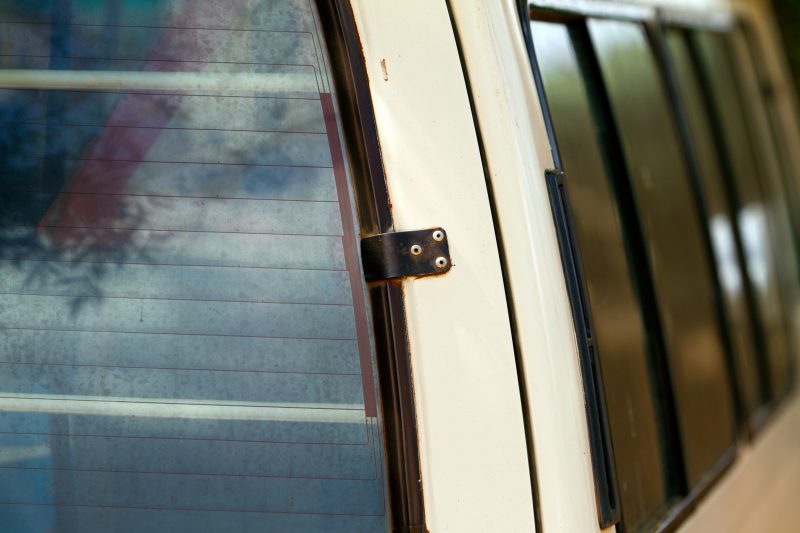 Look, it’s not going to happen. Richard Hammond might have the wherewithal to import Oliver from Africa, but you and I don’t.

And besides, just as a holiday romance is best viewed through post-coital, rose-tinted glasses, the Vanette would make a bloody awful car back home, something Nissan’s ill-fated US experiment comprehensively demonstrated.