“They pull a knife, you pull a gun. He sends one of yours to the hospital, you send one of his to the morgue. That’s the Chicago way! And that’s how you get Capone. Now do you want to do that? Are you ready to do that? I’m offering you a deal. Do you want this deal?” Jim Malone, The Untouchables

Volkswagen had the Golf. Ford had the Fiesta. Even Renault had the R5. And what did Vauxhall bring to the party? The Nova. Talk about bringing a knife to a gun fight… 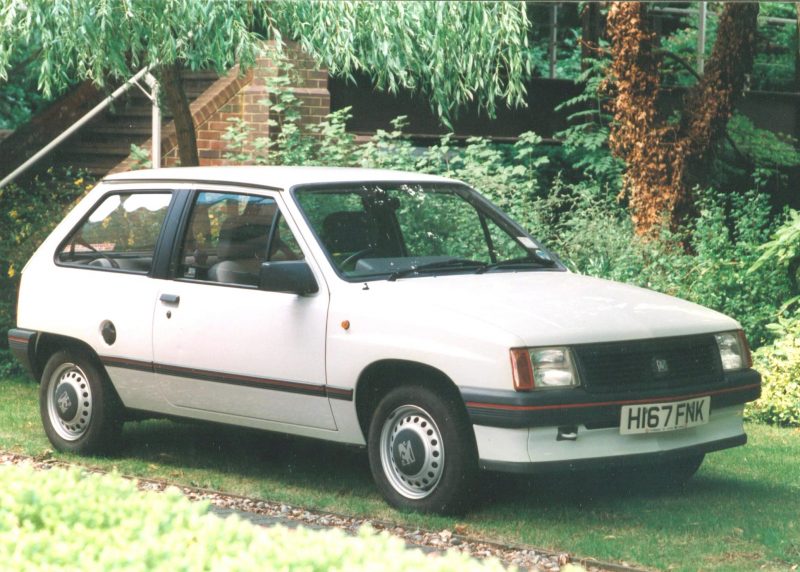 It’s easy to forget just had bad most cars were back in 1983. Sure, the Golf was a bloody wonder, but even that was getting old and the original was due to be outsized and moved up a class within a year. The Renault R5 might have been lithe and svelte, but it had the structural integrity of an open matchbox and displayed an alarming inability to cope with even a light dusting of road salt.

And the Fiesta? The Fiesta was on its way to being a good car, but another couple of decades would have to pass under its wheels before it was widely considered to have evolved into a great one.

So the low-hanging fruit was there for the plucking, and Vauxhall wanted some of it. The front-wheel-drive Opel Corsa had been launched in Europe seven months’ earlier, but production here was delayed because of an industrial dispute over where the car should be built. Yes, even Vauxhall’s industrial disputes were a decade out of fashion. (Spain won, in case you were wondering.)

Yet when it finally hit the showrooms buyers and press alike discovered that it really wasn’t that bad. Not great, and possibly not even good, but not bad was still half-a-notch higher than the outgoing rear-wheel-drive Chevette… 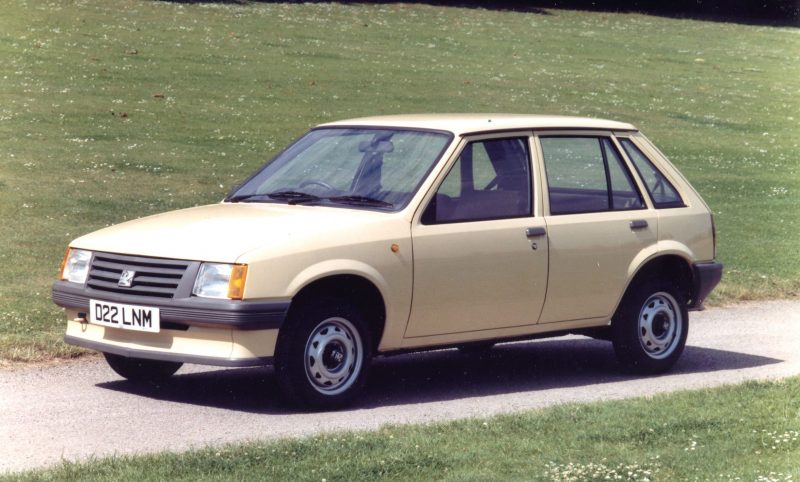 The first Novas were offered with a relatively small range of petrol engines: a 45bhp 1.0-litre; a 55bhp 1.2-litre; a 70bhp 1.3-litre; and a 75bhp 1.4-litre. A 1.5-litre Isuzu diesel joined the range in 1987, but its 50bhp was barely adequate, even then. The Nova range was eventually available as a three- and a five-door hatchback as well as a two- and a four-door saloon.

The 1987 Frankfurt Motor Show saw a 1.6-litre, fuel-injected, 100bhp semi-hot hatch join the range. The newly minted Nova GTE (rebranded the Nova GSi from 1990) had a top speed of 116mph and a 0-60mp time of 9.5 seconds, a level of performance that restored some credibility to the Nova range.

Credibility that was promptly undermined by the introduction of the Nova SRi, which looked like the GTE/GSi and shared many of its mechanical components save for a weedy 1.4-litre, fuel-injected, 80bhp engine. The top speed was just under 110mph but the yoof loved ‘em because they looked the part and the insurance was (almost) affordable.

Rarest of all was the 1.3 Sport. Introduced in 1985, it was a genuine homologation special boasting 93bhp thanks to a sportier camshaft, twin carbs, free-flow air filter and performance exhaust. Built for acceleration rather than top speed, it could streak to 60mph in well under nine seconds.

It’s thought that only 502 cars were built, although records also indicate that some kits were sold and retro-fitted to existing cars, which does rather muddy the water a little bit. Either way, you’ll probably never see one for sale, but if you do…

A mild facelift in 1990 saw the Nova receiving a dose of automotive Botox courtesy of new bumpers, headlights and a more modern front grille. The interior was refreshed too with a much improved dashboard and better materials but it was a case of too little, too late. The competition had shown the buying public that taking the piss wasn’t a successful marketing strategy and sales started to slump. The plug was finally pulled in 1993 after half-a-million had been sold.

The Nova (which translates as ‘No go’ in Spanish, hence the name ‘Corsa’ for cars used in Europe) died in 1993 and its replacement was thereafter called the Corsa across the whole of Europe, including the United Kingdom. The new Corsa was a vastly improved car, so much so that it was the best-selling supermini in Britain for a large chunk of the mid-noughties. 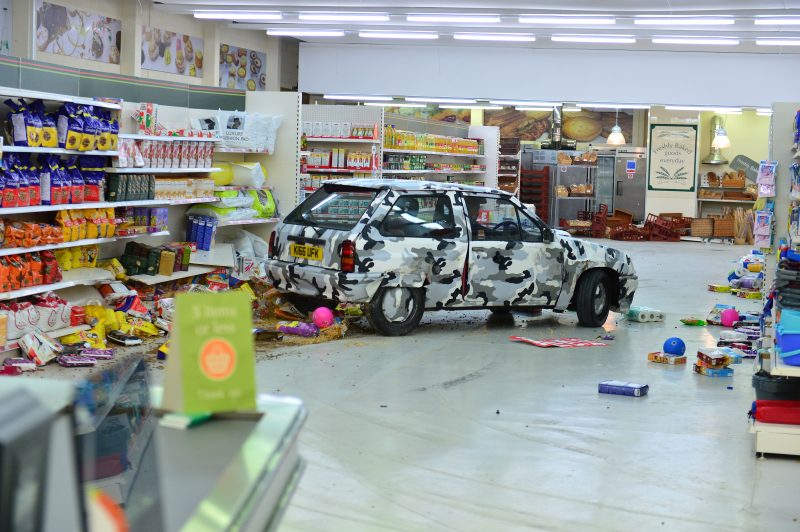 The Nova remained a small, light car throughout its lifecycle and the early models weighed just 740kgs. This makes them surprisingly good to punt along, even with one of the smaller engines under the bonnet. The 1.2-litre-engined cars are one of life’s simpler pleasures and while you’re never going to confuse them with a modern hatchback (although the Vauxhall Adam comes very close to serving up an authentic eighties’ experience in a brand new car) they’re streets ahead of anything from the seventies.

The main problem is an absence of mass often equates to a worryingly poor level of passive safety, and the Nova is no exception; you’re knee-high to just about every crossover, never mind a full-fat SUV, and the death and serious accident rate in Vauxhall’s baby is worryingly high…

Nor is the handling cutting-edge but then nor is it that bad and while the ride didn’t set new industry standards, you aren’t going to find too much to complain about either. Which is my long-winded way of saying that if you drive one with low expectations then you aren’t going to be disappointed, and might even be pleasantly surprised.

The post-1990 cars might have had better interiors, but the money and fun is in the early cars. After all, if you’re going to drive a modern classic, then it’s only right that you drive something that is as close to the designer’s original intent as possible, right?

Finally, a GTE is going to be epic entertainment, if you can find one that has escaped the tender touch of a teenage modifier. If you do find one – and they are out there – then this would be a Nova to cherish. That lightweight bodyshell and rev-happy engine conspire to cause all sorts of mischief – and the suspension and brakes are almost man enough to keep it all tidy and under control.

Short of a good, early Golf GTI there probably isn’t a faster way to re-experience the virgin teenage you. 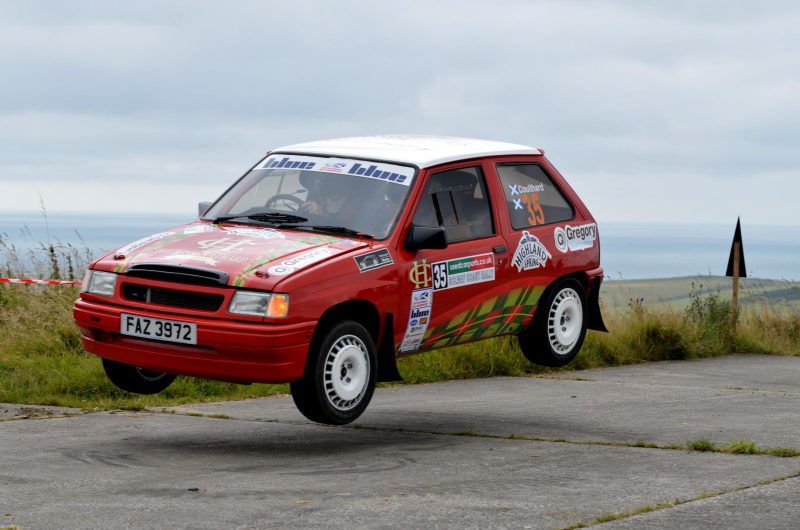 You can all stop sniggering, because the Nova has a proper competition history that includes a young Colin McRae winning the 1988 Scottish rally Championship behind the wheel of a Nova Sport.

And it is still competitive, continuing to form the backbone of clubman-level rallying. They’re cheap, too; £5,000 will easily buy you an ultra-competitive 150bhp 1.6-litre Nova with all the proper safety and performance kit. Motorsport really doesn’t get much cheaper than that. 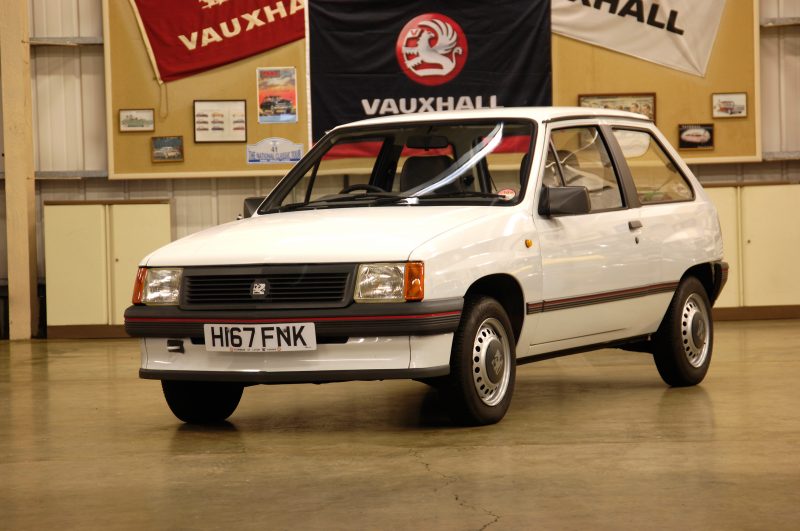 The three-door hatchback side-swerves epic by a hair’s breadth and is so the most collectable, closely followed by the five-door version. I’m sure the saloons will find their place one day, but that day is still in the distant future.

Rust is, of course, the biggest issue, closely followed by poor and ill-thought out modifications. The rear wings are a notorious rust-trap, as are the bottom of the doors. Repair panels are available, but cutting out all of the rot and welding in replacements is a time-consuming job, so often isn’t done properly. Front suspension turrets will probably show signs of rust too, but if it is caught early then it isn’t even close to being terminal.

Modifications are easier to spot but can be just as expensive to put right. Holes in parcel shelves where big speakers have been fitted are easy to spot and very common but good, untouched secondhand replacements are becoming pricey.

If you can dodge these two – and dodging either rust or modifications is still relatively easy but dodging both is becoming much harder – then you need to be looking at the condition of the interior trim, which is always going to be much harder to source than the mechanical components, all of which are still readily available. The SRI and GTE seats, for example, are almost impossible to find now, so it’s worth paying extra for a car with good ‘uns even if the rest of the car needs work.

If you’ve got this far, then the service schedule needs interrogating. The engines really need the oil changing every 3,000 miles and most won’t have bothered leading to camshaft wear and general engine unhealthiness that manifests itself by way of rattles, smoke, and miscellaneous oil leaks. The bottom ends, by comparison, are almost indestructible.

But if you do find an unmolested, rust-free example with a fully stamped service book showing that the manufacturer’s service intervals have been strictly adhered to then it’s worth getting your cheque book out, pronto.

Even so, you’ll probably still need to refresh the suspension joints and bushes, but that’s a small price to pay and does tighten the car’s dynamic behaviour up nicely. 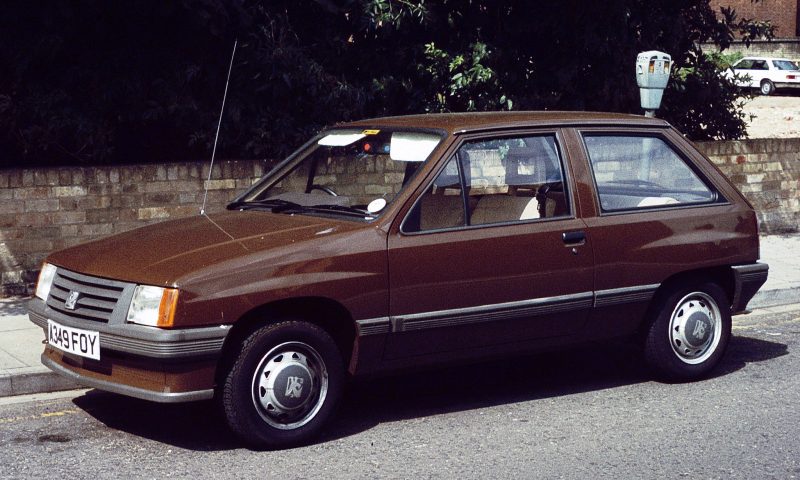 Are you sitting down? Good, because you’re in for a shock: the prices for good Vauxhall Novas are starting to rise and they are unlikely to stop rising anytime soon. The demand for iconic eighties’ cars seems to be insatiable and yes, before you ask, the Nova is now a bona fide icon.

GTEs and SRIs are obviously more expensive but you should still be able to find a decent sub-50,000 mile car for under five grand which is cheap; fast Fords have crested the affordability wave already, so it’s highly likely that its arch rivals won’t be too far behind.

If you’re handy with a welding torch and a set of spanners then tidy everyday runabouts can still be found for £500. 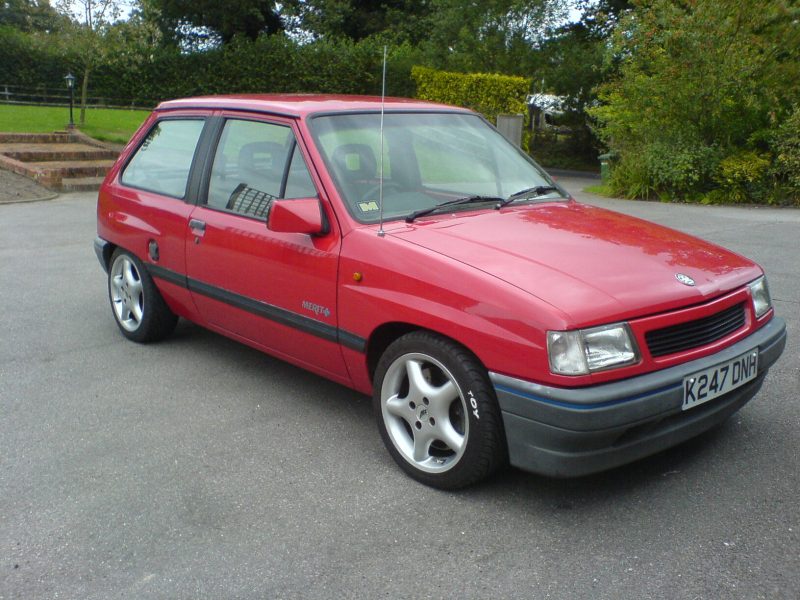 It’s a Nova, so you are going to want to modify it, aren’t you?

Most people begin by fitting the wheels and suspension from one of the quicker models, which is a cheap and sensible place to start: fitting springs from an SRi will drop a standard car by 25mm, while those from a GTE or GSI will drop the car by a further 25mm. If you want to go even further, a 60mm drop is reckoned by most to be as far as you would want to go if you still aim to use it on public roads.

As for performance, you can either go the old-fashioned route and indulge in some oily-handed engineering mods including fitting hotter camshafts, gas-flowing the head, bolting on twin-carbs and installing a performance exhaust. The 1.3 and 1.4 engines respond especially well to this sort of thing but if that sounds too much like hard work then you could go the whole hog and just slot in a bigger, fuel-injected engine. Swapping a carb-fed 1.6-litre for a fuel-injected version of the same capacity is considered to be an easy-ish job that only requires a change of petrol tank and some fiddling with the engine bay wiring loom.

Geeks among you will fit throttle bodies and aftermarket, programmable ECUs, for which we salute you. That’s basically witchcraft to us old folk, and we watch in awe as you tap away on your laptops to tease the optimum fuel/air ratio at various throttle openings.

Or, if your cheque book can take it, a Vauxhall specialist will install a 2-litre, turbocharged engine from a Calibra for about five grand. You’ll be left with 200bhp under your right foot and, we suspect, a newly discovered respect for the Laws of Physics. 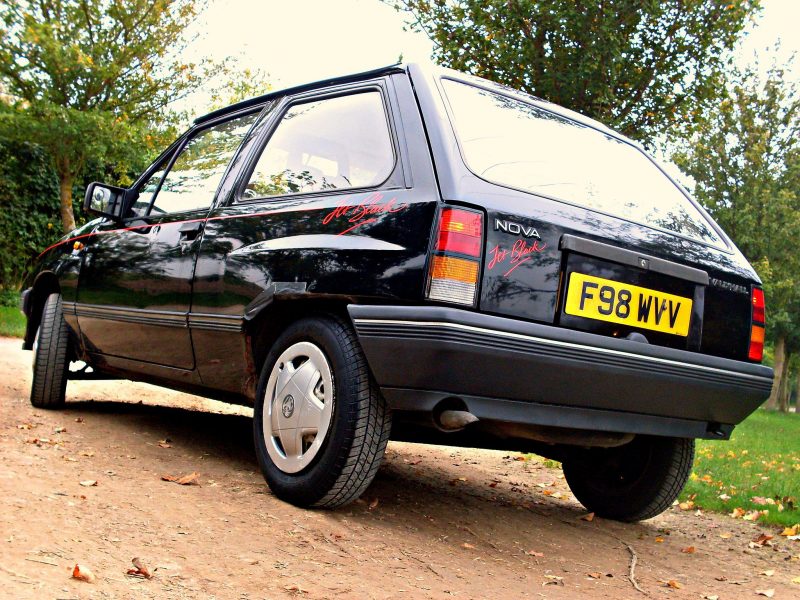 The Nova was extraordinarily easy to hot-wire. All a potential theif had to do was to pull the hazard warning light switch out of the dashboard and then replace it upside down. Doing so turned on the ignition, allowing you to bump start it and drive off into the sunset.

Don’t believe me? Why not click the link and watch uber-chav Jeremy Clarkson prove me right?