To call the Renault 4 a poor man’s Citroen 2CV is to misunderstand it entirely; where the 2CV always seemed to be trying just a bit too hard, the R4 always looked entirely comfortable in its own skin: if the Citroen ended its life as the automotive equivalent of a transvestite Madonna tribute act, the Renault was content to bow quietly out after channeling its inner Tiffany. 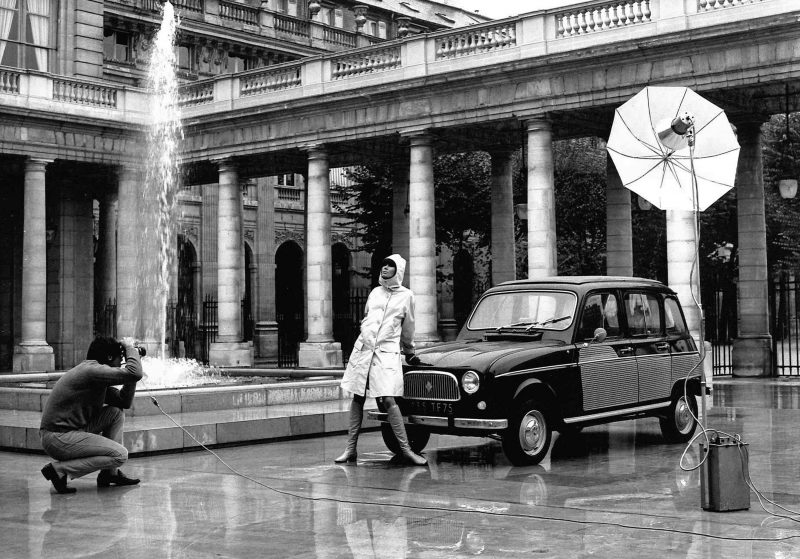 The Renault 4 emerged, almost fully formed, at the Paris motor show in 1961 and died looking much the same, thirty-one years and eight million cars later.

The R4 was a more powerful and luxurious version of the Renault 3, which was launched alongside it. While both cars shared the same basic running gear and bodyshell, the R4 offered the profligate motorist the delights of rear windows, a load mat, door trims and hubcaps, none of which could be found in the killjoy R3.

(Cost-cutting was such an integral part of the R4’s development that the development engineers referred to the fledgling R4 as the ‘350’, a reference to the projected price of 350,000 French francs ‘and not a centime more’.)

More importantly, the R3 suffered the indignity of a 603cc engine, while the lucky R4 owner struggled to rein in 747cc of throbbing French horsepower. Or 22.5bhp against 26.5-32bhp, depending on specification. Yes, the French car taxation system was a bit odd back then. 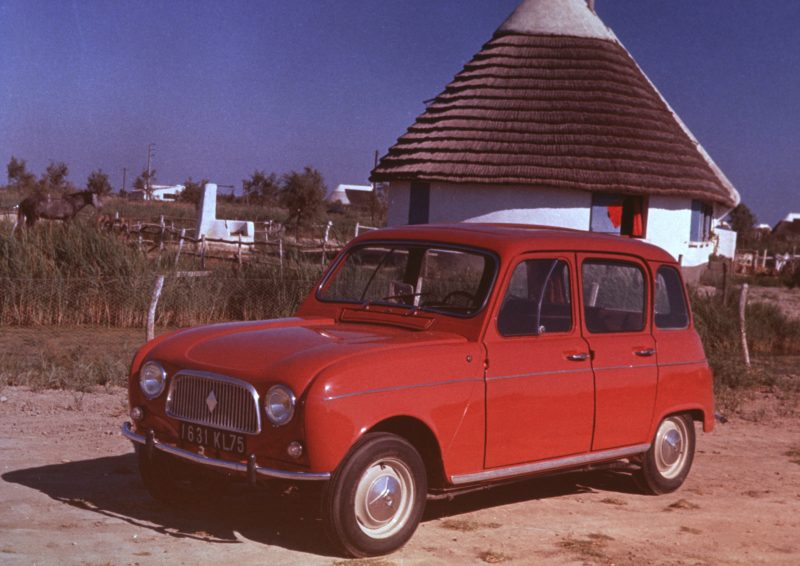 Anyway, the front-engined Renault 4 replaced the rear-engined 4CV, a move that demonstrated Renault’s fear of losing market share to the Citroen 2CV rather than the VW Beetle. Renault didn’t, however, copy either company in equipping the R4 with an air-cooled engine; while doing away with the radiator, hoses and associated engine water jacket might appeal in terms of simplicity and ease of maintenance, especially in rural areas and Third World countries (the R4 sold in huge numbers in Africa), it costs much more to develop and build in the first place and Renault simply didn’t have money to waste on developing anything so sophisticated, which is why the Renault 4 ended up with the 4CV’s engine, albeit located at the other end.

Renault saved more money by giving their new car a three-speed gearbox, when even cars like the Citroen 2CV had a four-speeder, a move that even poverty-struck France thought a bit mean. Of course, Renault was forced to capitulate, as everyone knew it must; 1968-model-year cars gained a proper four-speed gearbox.

The need to save money forced some interesting engineering solutions; while previous generations of Renault cars has featured a monocoque construction, the R4 had a separate platform to which the bodyshell was bolted – and as the ‘shell has now been relieved of its role as sole provider of torsional rigidity, Renault was free to engineer it using thinner metal and glass, which saved oodles of weight. (That it would have saved money too probably didn’t escape the bean-counters’ attention.) The result is a 600kg car with a flat floor and a super-practical hatchback configuration. 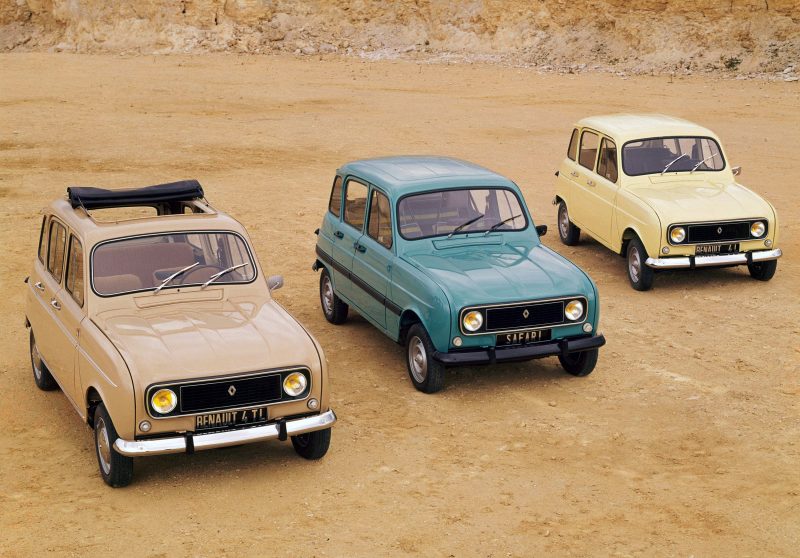 The suspension was all-independent and by way of torsion bars, giving a supple ride and the ability to carry a relatively high payload. Interestingly, the left-hand-side of the car has a shorter wheelbase than the right-hand-side. Accepting a three-inch difference enabled Renault to fit simpler – and, yes, you’ve guessed it, cheaper suspension – by mounting the rear torsion bars side-by-side behind one another.

Cost-cutting aside, the suspension was designed to be easily adjusted and could be raised in a matter of minutes to increase the ground clearance, giving the R4 a surprisingly high degree of off-road competence, something the utilitarian market appreciated enormously.

By 1966 sales had hit a million despite the Renault 4’s growing reputation for being even more unreliable than its compatriot competitors, which was saying something for a mid-sixties French car. One website points out that Which magazine reported in 1968 that 74 percent of all R4s were off the road for more than four days in a year while being repaired following a mechanical breakdown. That’s not exactly a ringing endorsement, is it?

Speaking of the late sixties, 1968 also saw the introduction of 12V electrics, replacing the earlier cars 6V, and an 850cc engine. This, if for no other reason, makes post-67 vehicles much easier to live with and maintain than their earlier brethren. 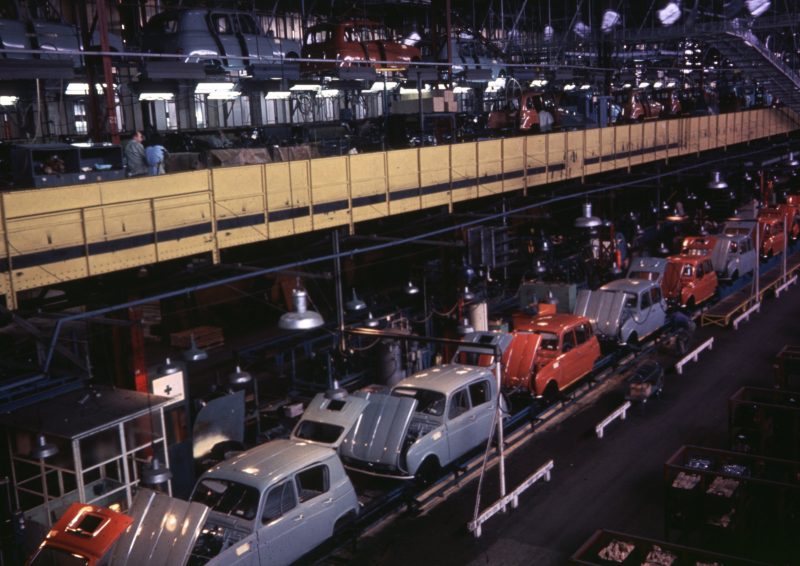 Front disc brakes finally made an appearance in 1981, replacing the front drums that had been doing sterling service for the past two decades. The other significant change was the introduction of the 1108cc engine in 1982 – but before you get too excited, I must point out that it still only produced 34bhp.

The R4’s interior was as simple as you might imagine; sliding windows saved weight and money, while the dashboard conveyed the bare minimum of information. It did get more luxurious over the years, but not by much but then no one ever bought one as a sybaritic city car. 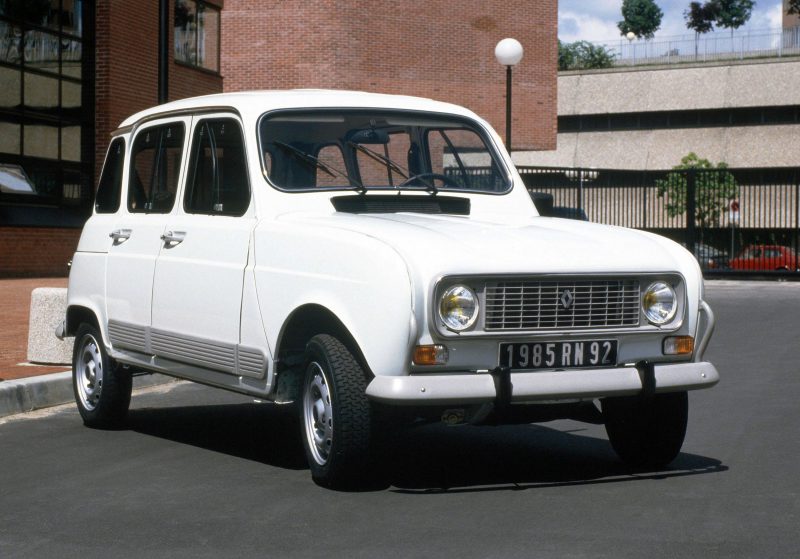 The most basic Renault 4 featured a manual petrol gauge at the tank, one sun visor, no headlining or interior trim, and heating but no ventilation. The next model in the range was the Renault 4L , which gained an additional sun visor, bringing the total tally to two. It also had more exterior brightwork including a fancy front grille, two more windows, a heater fan, and some door trims. The R4Super arrived in 1962 with the 747cc engine but 32bhp.

The range was simplified in 1965, and the most basic model is now the Renault 4 Luxe. The R4 name was dropped at the same time; it was thereafter known simply as the Renault 4.

The Renault 4GTL arrived in 1978 with the 1.1-litre engine and plastic exterior door trims to help ward off car-park dings and knocks. 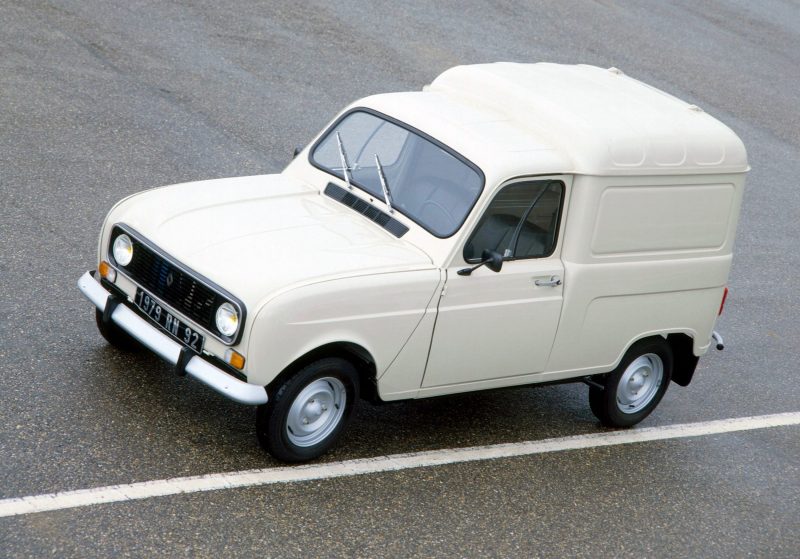 A four-wheel-drive Sinpar was offered, as was a van and a pickup. Interestingly, Renault also offered an all-electric version, preceding the current fashion for electric vehicles by thirty years, even if the R4 EV does have more in common with a milk float rather than a Nissan LEAF… 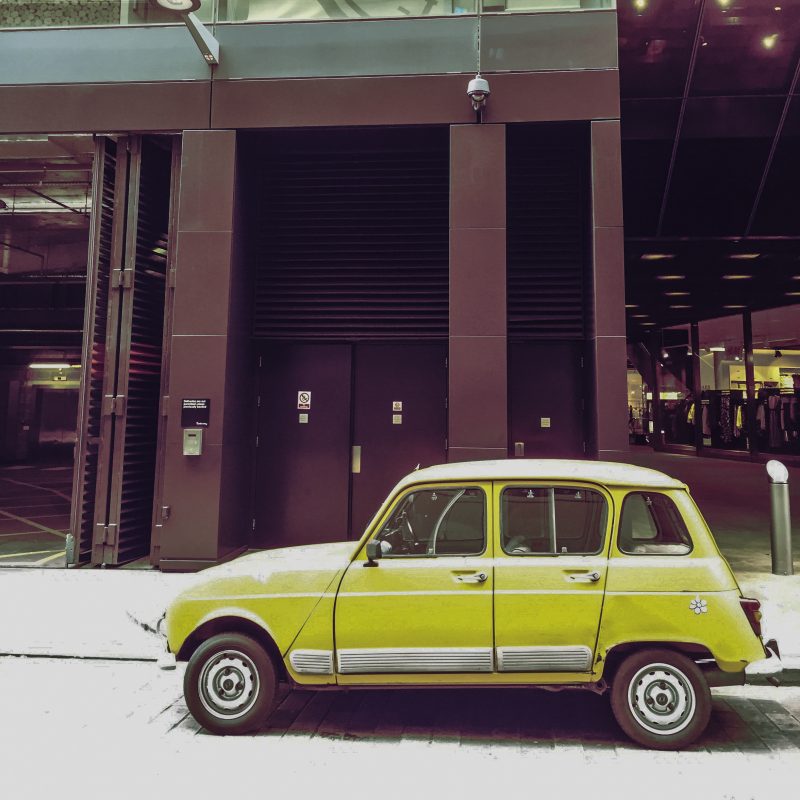 The Renault 4’s simplicity and ground clearance offered some advantages to the competitive driver, even if they were somewhat tempered by the low-powered engines.

However, the R4 did enjoy a modicum of success most notably in four-wheel-drive Sinpar form, coming fifth and third in the 1979 and 1980 Paris-Dakar rallies respectively. The Renault 4 eventually found its niche in long-distance endurance rallying, remaining competitive well into the noughties.

A car was even entered in the 2011 Monte Carlo rally to commemorate the car’s 50th anniversary. 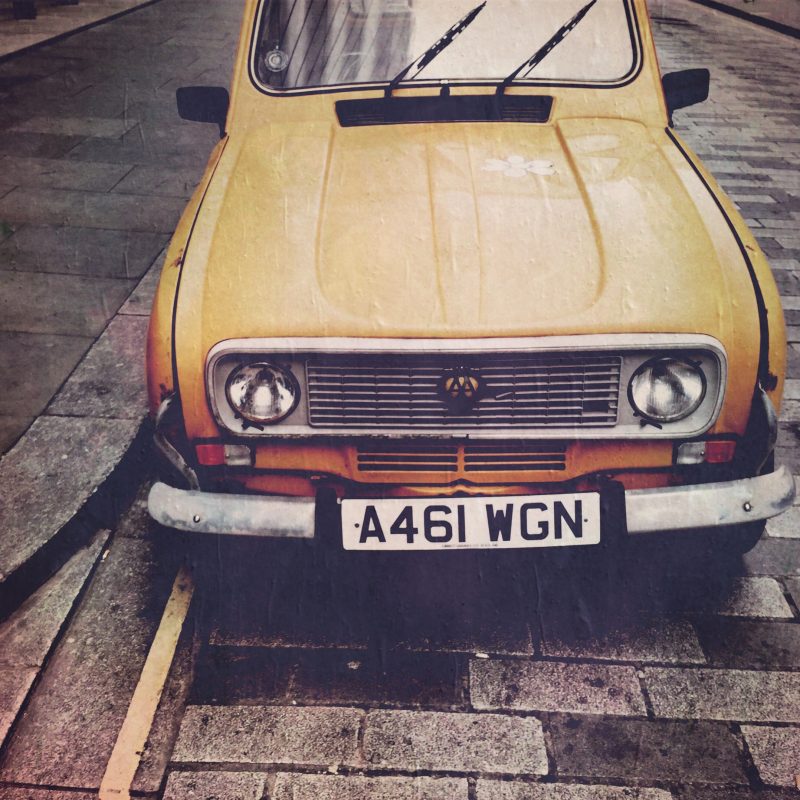 I can do no better than the channel the late, great Russell Bulgin, writing in CAR magazine in March 1994 on the R4’s many charms:

“A week’s fun waxing across Morocco in a Renault 4, however, was like meeting an old flame 15 years on. My father’s first car was a 4; mine, too. Ten minutes behind the wheel of a 4 reminds you that this is one of the world’s great practical cars, which automatically makes it as essential a holiday accessory as a family-sized pack of Imodium. Forget the Citroen 2CV (too weird, too tinny, too slow, too lentil soup), forget the Mini (too cramped, too joggly, too noisy, too Swinging London): as a car to slob in, the 4 beats both hands down.

Why do I like the 4? Lots of reasons: a superb ride; a great gearchange; lots of grip if you ignore the roly-poly-pudding-and-pieness which accompanies committed cornering; loads of room inside; spongiferous seats; flat glass; flat floor; flat out in every gear; the list goes on. And, of course, it is the only car I can drive deftly while wearing a pair of size 13 Wellington boots.

Driving a cheap hire car tends to redefine precisely what your basic transport needs are. No radio? Talk to your passenger or sing to yourself. Can’t pass trucks uphill? Nuzzle past on the downside. Too much din at 70mph? Cruise at 60mph. And so on.

This 4 chugged from the Sahara to a pass 7000ft up in the Middle Atlas, started first time after zero-degree nights, and only failed once — wading a ford with a steep exit — when the clutch revealed its age by refusing to feed in neatly. So I reversed out.”

In much the same way as a 2CV, the Renault 4 must be driven flat-out absolutely everywhere. You haven’t got enough power to brake for bends, and anyway, you’re not going to be going fast enough to get yourself into much trouble, even if the alarming levels of body lean suggest otherwise.

Brakes are barely adequate, but haven’t you heard Russell and me counselling against their use? 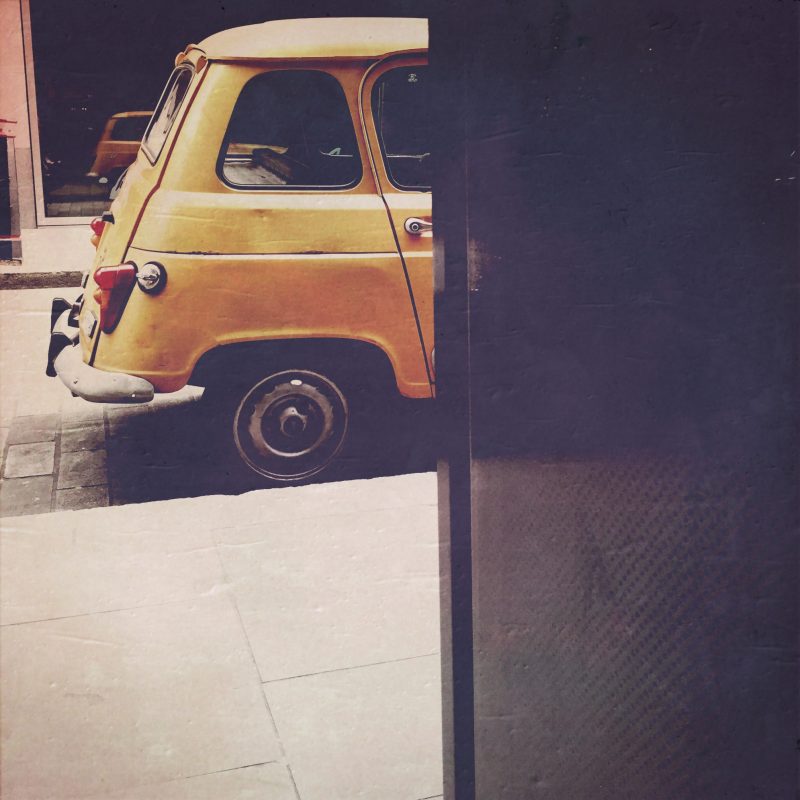 As a French car, I don’t have to tell you that rust is going to be the main problem, do I? However, where the 2CV has a simple ladder chassis, with all the benefits during restoration that that layout confers, the R4 has a double-skinned, pressed-metal platform bolted to the girders that rots horribly – and removing the body to repair it is a bit of a faff, apparently. The weak point is the area where the rear suspension bolts onto this platform. If it hasn’t been repaired then it will probably need repairing soon. You have been warned.

Oh, and you’ll also be doing a lot of repairs; where buying a new 2CV chassis is a simple matter of flexing your credit card over t’Interweb, you simply can’t buy a replacement chassis for a R4.

Given the Renault 4’s humble output, the mechanicals are under-stressed and so rarely give cause for concern. There are reports that the later 1.1-litre engine can burn valves on long runs on lead-free fuel, so the prophylactic use of an additive would make sense.

The interior is simple, but still needs viewing with a critical eye. Early and cheap cars had vinyl seats, while later, more up-market models had fabric seats. Replacements for the later cars are widely available, but you’ll have to dig deep and pay a specialist to recover the seats and door trim panels in your earlier car.

A list of places to buy stuff for your new pride and joy can be found on the excellent Renault4.co.uk website. 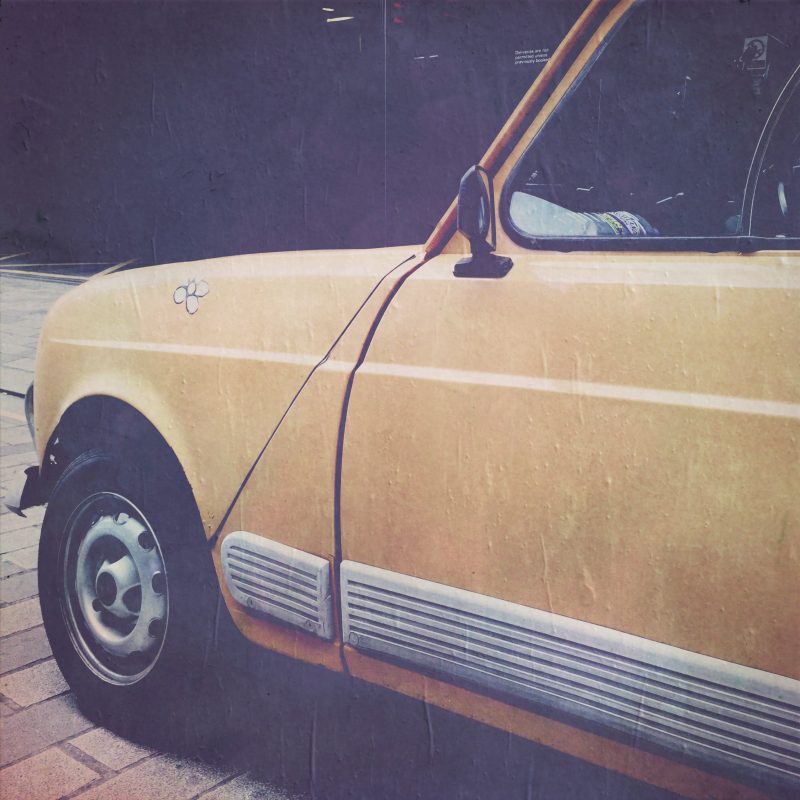 You can still buy a running, MOT’d R4 for under a grand, but I’d be tempted to spend a bit more for something that isn’t going to have you waking up in a pool of sweat in the middle of the night.

Five grand is top money for a usable car, even if trailer queens are starting to nudge five figures.

And I shouldn’t need to warn you that a sub-£1,000 restoration project is going to set you back far more than a top-money car in the long run, should I?