The Fiat 500 is a byword for motoring simplicity, minimalism and driving cool; the Citroen 2CV might jostle for space in people’s collective conscience as the definitive small car but for car guys and gals, the Fiat 500 is the one we’d choose to tuck away in a (small) corner of our dream garage. 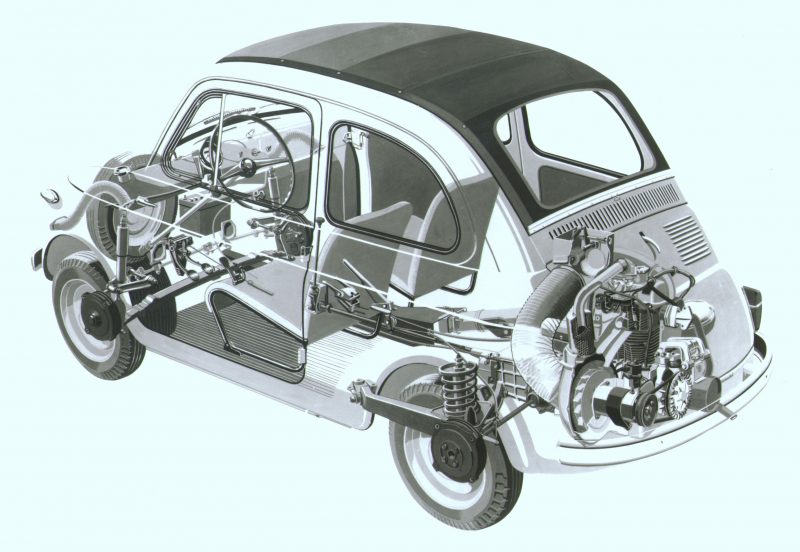 Born in 1957, the Fiat Nuova (new) 500 shared the Renault 4 and VW Beetle’s rear-engine, rear-wheel-drive layout. For a generation that grew up with front-wheel-drive, front-engined hatchbacks this might not seem like an especially obvious route to take but the Europeans were canny engineers and understood that when simplicity (and therefore cheapness) is the watchword, this layout offers an awful lot of space for not a lot of money.

The first cars could carry four people. Well, they could in theory. In practice they could carry two adults in the front and a couple of small kids – or some shopping – in the back on what was laughably marketed as a rear bench seat. The roof featured a huge canvas centre section that rolled back to expose the occupants to the burning Italian sun. (That it also enabled the driver to carry large and long loads was very much a secondary consideration. Most owners were more interested in the posing possibilities it offered than any practical application it might have.)

The twin-cylinder engine – all 500ccs of it, hence the car’s name – churned out 13bhp, enough to whizz the little Fiat to a top speed of around 60mph. But speed wasn’t the key to the 500’s success. The reason that millions of Italians, and later keen drivers throughout the world, took the 500 to their hearts was the winning combination of bugger all weight, all-independent suspension, and super-direct steering that made even then shortest journey a Grand Prix to remember. 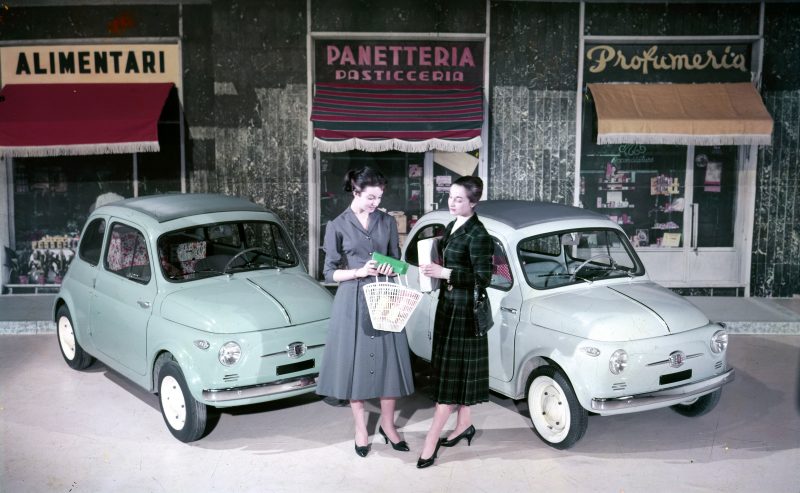 With your foot flat to the floor, the tiny 500 could be slotted through the narrowest of gaps with complete confidence, and arriving sideways in front of your favourite café before stepping nonchalantly out via the suicide doors is one helluva way to make an entrance. This car is, perhaps, the reason the Italians are renowned for their effortless cool and sex appeal. (So my wife claims. I don’t see it myself…)

Because suicide doors are easily the coolest feature of any car, of any year, and at any cost. They were so much a part of the 500’s charm that they were retained by the next generation Fiat 500D, built between 1960 and 1965. In fact, the 500D might be the sweet spot in the range as a secondhand buy because it keeps the older car’s doors but gains some unnecessary, but nice to have, fripperies like an ashtray, sun visors and even an electric windscreen washer pump.

The accountants at Fiat must have taken some time out from their busy schedule counting paperclips and sorting their propelling pencils into size order because they came to realise that suicide doors were a more expensive option than the alternative, more conventional solution. As a result, they wasted no time in issuing a Cease and Desist letter and front-hinged doors made an appearance on the 500F of 1965. They also deleted some of the chrome trim, made the rear lights more boring and (presumably) cheaper to make and even removed some of the numbers from the speedometer. The meek really were inheriting the earth. 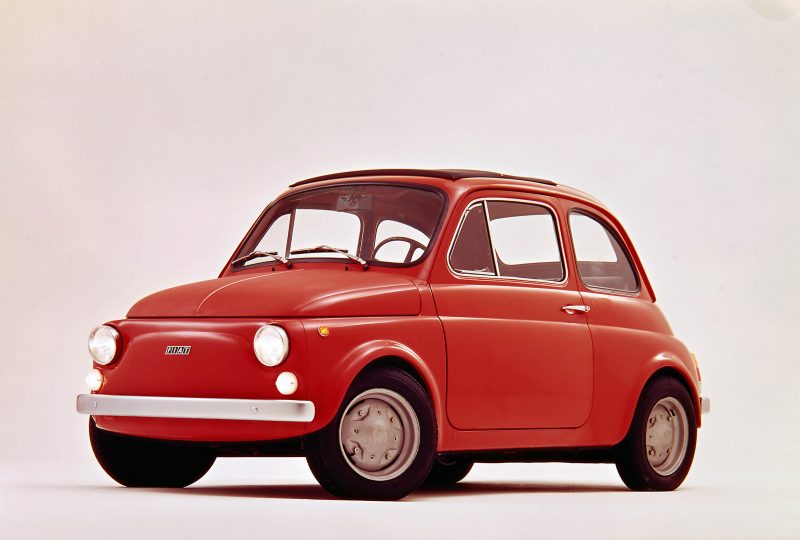 The 500R arrived in 1972 with the Fiat 126’s 18bhp engine and a whole lot of attitude. It was by then hopelessly outdated; drum brakes all round might be effective enough when they’ve got the square root of sod-all to stop but they didn’t really add anything to the car’s showroom appeal. By then most people were also starting to struggle with the 500’s non-synchromesh gearbox having lost the ability to change gears via a double de-clutch. Despite slumping sales, the accountants stayed resolute and refused to find the money for a synchromesh version. 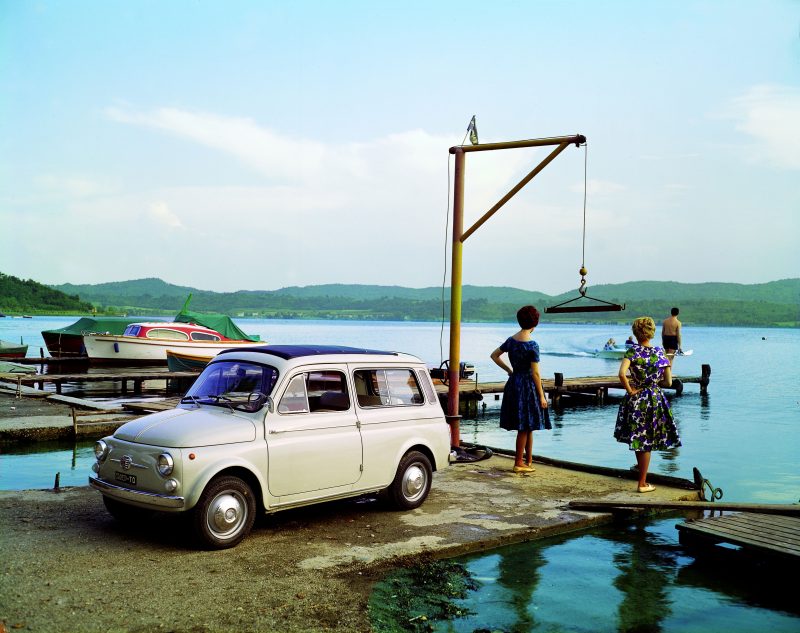 Three variants stand out as being of interest to us: the 500 Giardiniera, the 500 Sport and the 500 Abarth.

The Giardiniera, Fiat’s stab at turning the diminutive 500 into a bona fide estate car, is an attractive side note and if you found a good one you’d be the third coolest kid in your town. The Giardiniera’s bodyshell was extended by four inches and the engine was laid on its side to make space for the estate boot. It was fitted with the Fiat 600’s big brakes and had a full-length canvas roof.

A van version, called the Furgoncino, was also produced. If you could find one, and persuade the owner to sell it, you might just have the basis for the coolest micro-camper the world has ever seen. 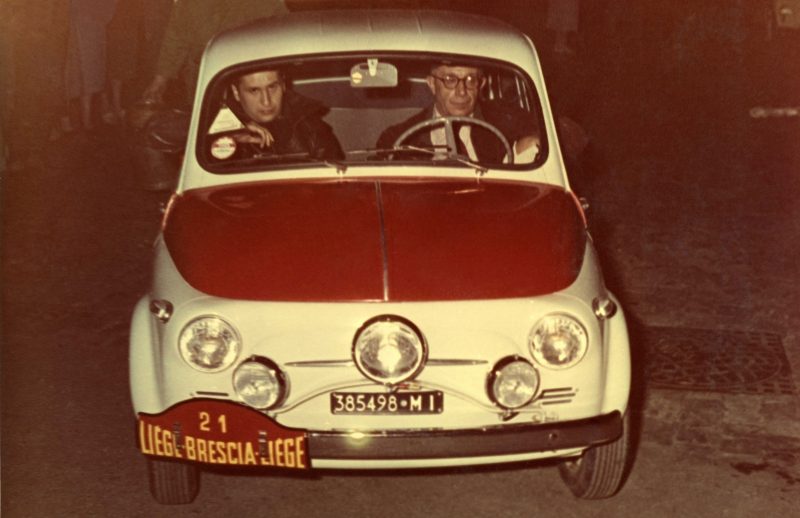 The second coolest would drive a Fiat 500 Sport. Introduced in 1957 to build on the 500’s burgeoning track and competition success, the 500 featured an insane 21.5bhp, solid red roof, red steel wheels (with chrome hubcaps, no less), twin red stripes down the side and a red and white interior. It looked so fabulous that it was responsible for more unplanned pregnancies than any other car of the 1950s[1].

But if you want to be the coolest, you need an Abarth. 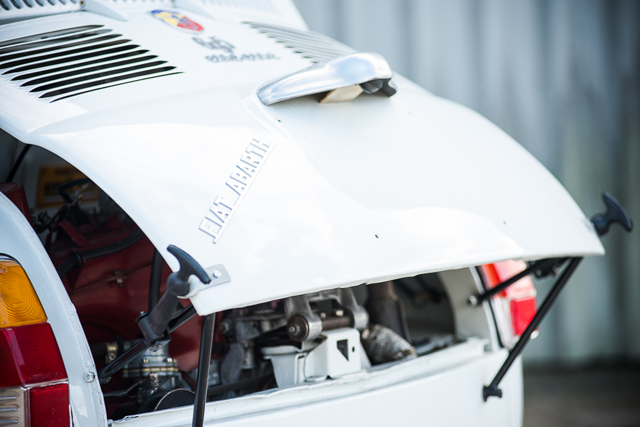 An Italian Mini Cooper, the Abarth features all the fast car clichés of a bigger, more powerful engine, uprated suspension and plenty of go-faster stripes. Plus a fucking scorpion as its badge.

It also, in later iterations at least, featured a boot lid that was propped open, ostensibly to help keep all those raging horses cool. All this, plus suicide doors? Jeez, what a time to be alive.

The first Abarth was the 595 of 1957 with 28bhp, closely followed by the 695 with 32bhp. The fastest, and so most desirable, is the 695SS with 38bhp. Not impressed? Well, you need to bear in mind that the 500 only weighed 500kgs, so this was more than enough for most road-based Lotharios; the changes might have been modest but they slashed the 0-60mph time by a third to 20 seconds, while the top speed soared to a heady 70mph.

But real racers, the sort that were prepared to splash out some good, cold cash in the search for even more speed, could eke out up to 55bhp without sacrificing too much reliability. As long as they propped the boot open, obviously. 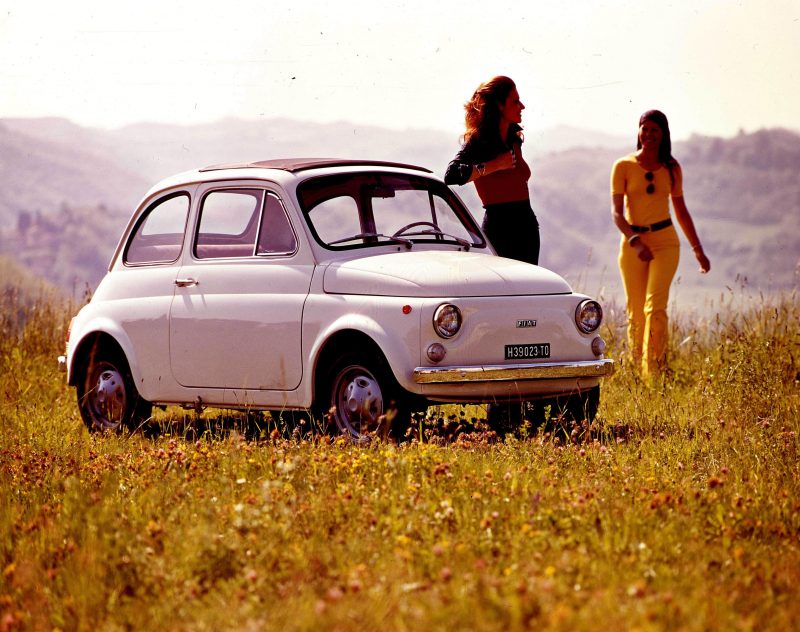 A top speed of 60mph isn’t ever going to be considered fast, especially when you consider that it takes one whole minute to get there. And yet an all-in weight of 500kgs, a low centre of gravity and a width of just over 4’ means that the 500 can be hurled around like few others.

The steering is super-direct and while the puny drum brakes might not feature on any engineer’s wish list, they get the job done with remarkable efficiency. The key, as with any under-powered car, is to maintain momentum and never, ever lift. Driven like this the 500 is much more fun than you can imagine.

As long as you can fit in one. The Fiat 500 is one of the few cars that makes a Caterham seem like a limo.

Oh, and you should take care not to drive it too far from home. People do travel long distances in them but then some people watch Britain’s Got Talent, proving that just because you can do something it doesn’t mean that you should. 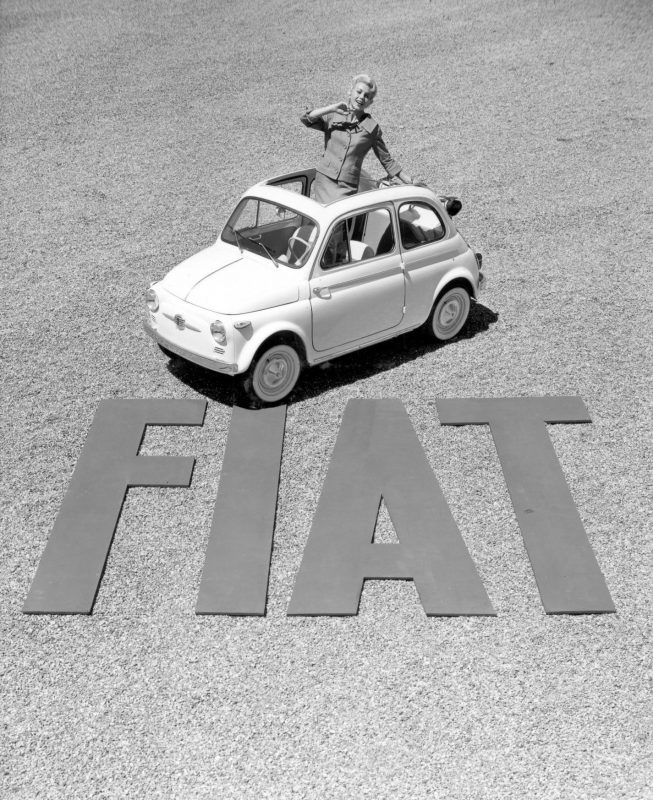 Your enemies are rust and originality. Rust, well, because it’s Italian, and originality because everyone seems to think they can improve the 500. They usually can’t.

So, take a small magnet to check for rust and inspect the panel lines closely; Fiat build quality was never great but it is almost certainly better than P38 Pete’s. Sadly, rust seems to take hold in the very places that are hard to see – think inner wings, the front-mounted battery holder, inner sills and floor, and the rear spring mounts – so be prepared for a bit of a struggle, probably upside down, to see ‘em all. The UK’s online MOT history check is an invaluable resource as it shows every MOT result – including advisories – for the past few years. I’ve lost count of the number of classic cars whose claim to be “rust-free and never welded” has been proven false thanks to a ten-second check.

The oily bits are tough but likely to be oily; leaks and seeps aren’t uncommon but they’re rarely serious and can be remedied as and when you find the time and money as long as you keep the fluids topped up. 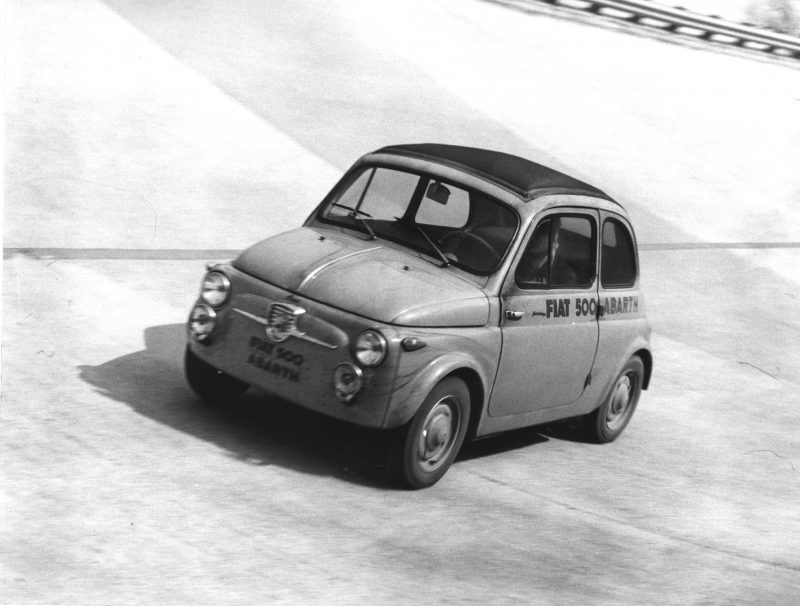 The Giardiniera seems to be fetching a minimum of £15,000 with the really good ones going for twice that.

Finally, the 500 Abarth is a law of its own; you’ll need to find a minimum of £25,000 to be able to tuck one away in your garage – and cars with a verifiable competition history are going for considerably more. Replicas are much more affordable and possibly more fun, if they’ve been built properly. 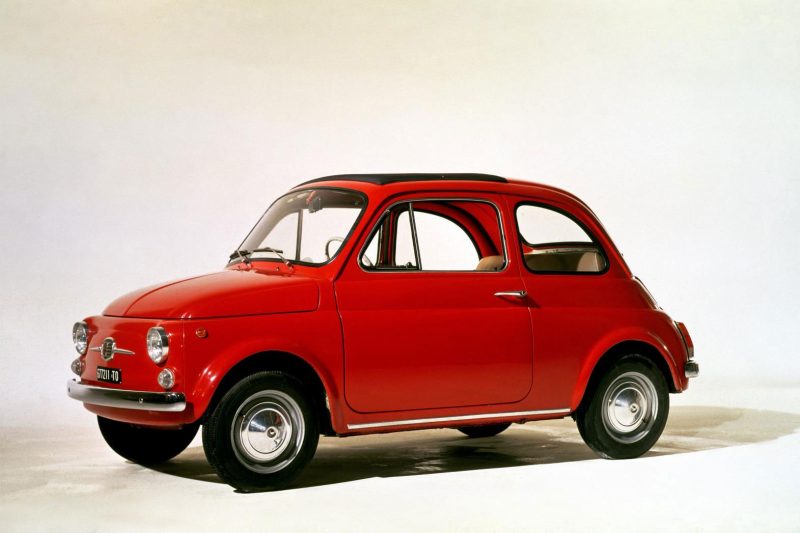 Many 500s have been retrofitted with larger engines, synchro gearboxes and more powerful brakes. Even more have had newer, upgraded interiors fitted and Abarth-style stripes.

Some have even been turned into very convincing Abarth replicas, but a lot just claim to have been. Tuning bits are widely available and relatively cheap so only an idiot or a cheapskate doesn’t do it properly and you don’t want to buy a used car from either.