The Mercedes Unimog is the German equivalent of the Land Rover, so it’s bigger, better built, more reliable, exquisitely engineered, and far more versatile than anything that has ever come out of the West Midlands.

The Unimog – UNIversal Motor Gerät (Gerät is German for device) – was designed to be a one-stop agricultural solution for cash-strapped farmers. As a result, it has both front and rear power take-offs (PTOs) and three-point linkages, equal-sized wheels for better on-road manners, portal axles for extra ground clearance and a flexible chassis that is an integral part of the suspension. The engine is optimized for torque, not power, and it can pull astonishingly heavy loads, albeit very slowly.

It was an instant sensation and Unimog rapidly became a byword for toughness. While hipsters drive Defenders, gnarly old foresters drive Unimogs. A Defender driver might be better company over dinner, but a Unimog driver will help you bury the bodies and never tell a soul. 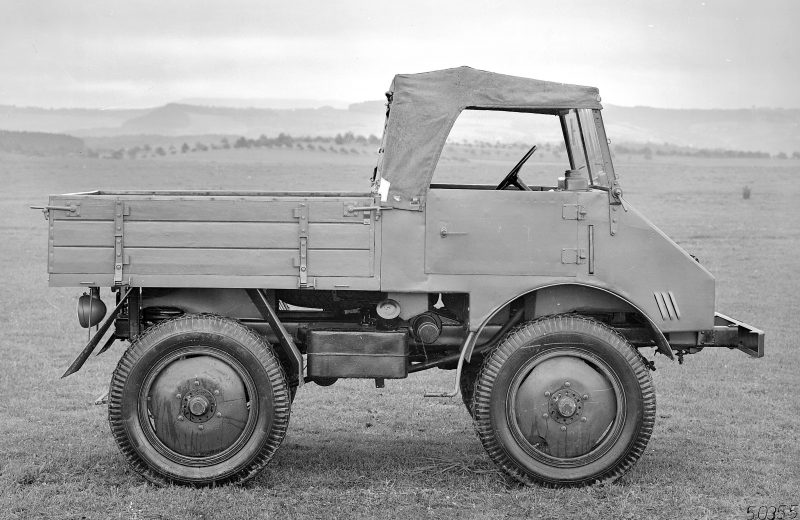 The first Unimog hit the dirt in 1947. Built by Boehringer and fitted with a lowly 25bhp petrol engine it wasn’t ever going to set the world alight, but then there’d been plenty of that sort of behaviour over the previous few years and all European farmers wanted was to get back to pulling and pushing stuff around their fields in peace.

The ban on Mercedes building four-wheel-drive vehicles was lifted in 1951, and the first Unimogs badged as such arrived shortly thereafter. Designated the U401 (with a 63-inch wheelbase) and U402 (83-inch), the new models had a soft-top cab; a hardtop would arrive in a couple of years. The U404 made its debut in 1955, marking the start of a new era as it was designed as a forestry, rather than an agricultural, tool.

1963 saw the introduction of the round-cab U406/416 (the 406 has the shorter 94-inch wheelbase, and the 416 has a longer wheelbase at 110 inches) U900 models. These are the iconic classics that most people think of when you mention the word ‘Unimog’. A variety of engines were fitted but most will have a straight-six, 5.6-litre Mercedes diesel that is a bit crude and rough but will outlast mankind itself.

The Unimog continued to develop throughout the 1990s, but the models produced between then and now are very clearly commercial vehicles with industrial users in mind. They’re clever (anyone for a vehicle that can be changed from left-hand-drive to right-hand-drive in an instant?) and impressively versatile but hideously expensive and outside the scope of any car enthusiasts garage. Unless you’re Arnold Schwarzenegger but then being Arnie isn’t exactly the sort of life ambition you’re going to want to boast about, is it? 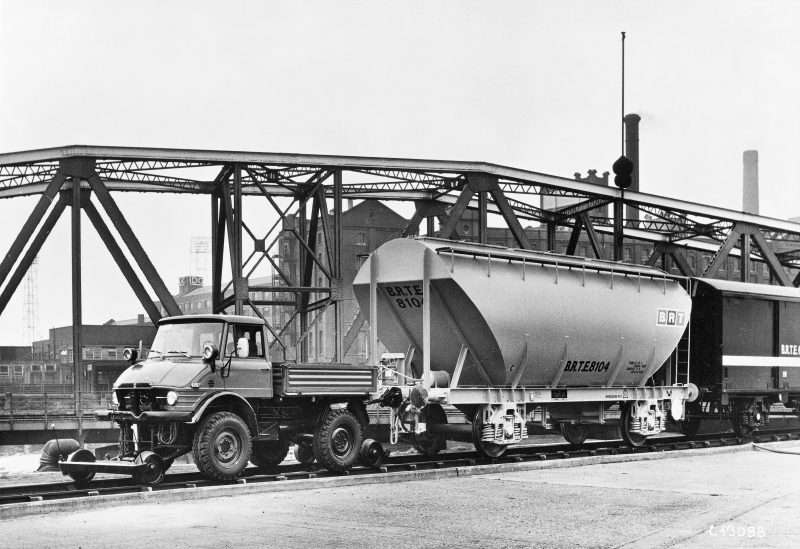 The Unimog might be more versatile and better built than a Defender but it makes even the early series Land Rovers feel like a limousine to drive and ride in; the Unimog feels every inch the tractor it is. The top speed is around 50mph but you won’t want to drive one over about 40mph, if for no other reason than it is the noisiest vehicle you are ever likely to travel in unless you’ve spent time in the armed forces.

The cabin is high and cramped and shared with the diesel engine, so it’s loud, hot and smelly. It’s scary too; with six levers where one normally does the trick (plus various controls to operate the hydraulics and PTOs) even your fearless motoring correspondent was reduced to whimpering a request for clarification.

Once you’ve got it all figured out, you’ll find that they steer surprisingly well, even on agricultural tyres (non of your lily-livered, vegan-fuelled, all-terrain nonsense here…) and have the tightest turning circle of anything this side of a Black Cab. Of course, you’ll get a bloody good upper-body workout whenever you need to change direction or gear but this is a man’s car my son and if you aren’t up to it then you’d better jump into your cute little SUV and get the hell out of my way.

Coil spring suspension gives a better ride than you might imagine but that short wheelbase does give a choppy ride and adds an interesting dimension to the Unimogs high-speed handling – if you are deaf enough to have ventured above 30mph, that is. Better to sit back and look down on other drives, both physically and philosophically. 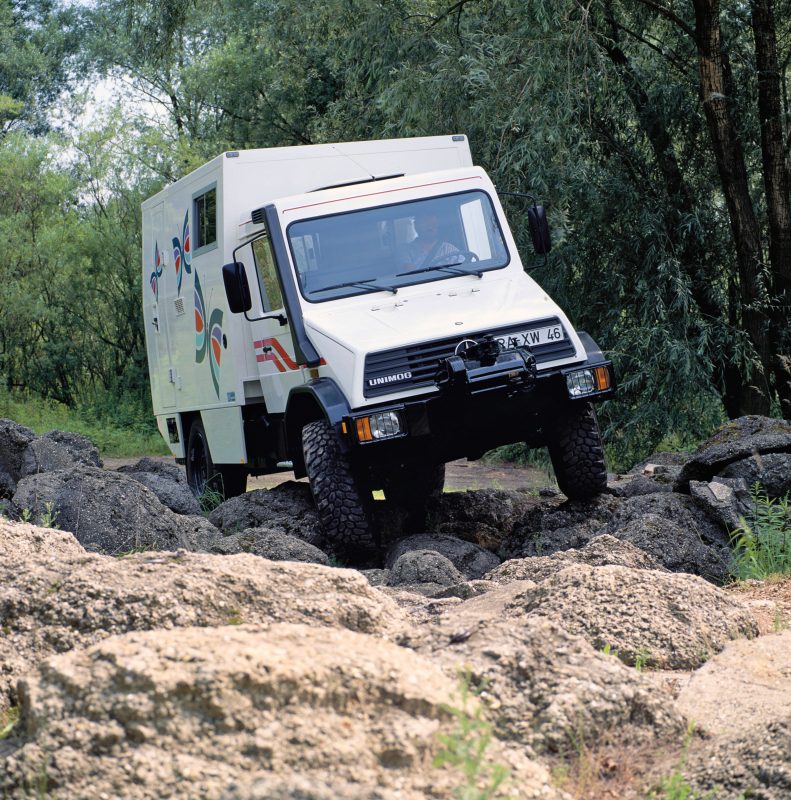 Speaking of which, the Unimog excels at getting to places no other vehicle could reach. Those portal axles give an astonishing 420mm/16½ inches of ground clearance and the front and rear differential locks ensure that all four wheels will keep turning no matter how gloopy the going is underfoot.

The approach and departure angles are better than 45° and are in a different league to any other off-roader too, and the incredibly high ramp angle shouldn’t ever leave you grounded, no matter how acute the summit at the end of the climb. Crossing ditches is great fun too; just remember to approach them at an angle, won’t you?

Of course there is a low-range gearbox, but while Land Rovers have a dinky 8-10 forward gears, the Unimog has up to 20 forward speeds, the lowest of which moves at a glacial pace but will continue to do so in the face of actual glaciers. The towing capacity of a Unimog is a function of the towing hitch, not the vehicle: with air brakes (yep, just like those you’ll find on a lorry) and the right towing hitch, even an 84bhp Unimog can legally tow 22 tonnes. 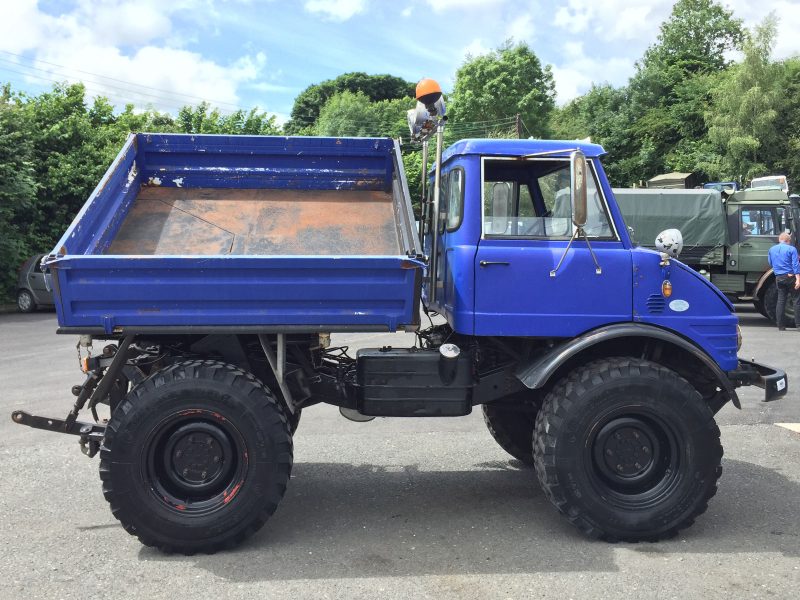 Buying one is a matter of deciding what you want to do with it and how deep your pockets are. There are a bewildering number of options and models but with under £20,000 the U406 (or U900; both designations are correct) models offer the best value. The diesel engines might only produce between 65 and 110bhp depending on the year but they’re as tough as old boots and will run forever.

The chassis is built from the thickest steel you’ll ever come across and so is almost immune from rot. This is not something that can be said of the cab, which is made from sheet steel that Lancia rejected as sub-standard. Good secondhand cabs are available, and changing them is straightforward, but a good cab makes life so much easier.

The 5.6-litre straight-six engine is indestructible (and sounds freakin’ awesome) but the hydraulic system is complex and almost impossible for anyone other than third-generation farmers to understand. Suffice it to say that there will be leaks but they probably won’t be terminal. Just check to see that everything goes up and down like it should, keep the tank topped up and you should be OK. 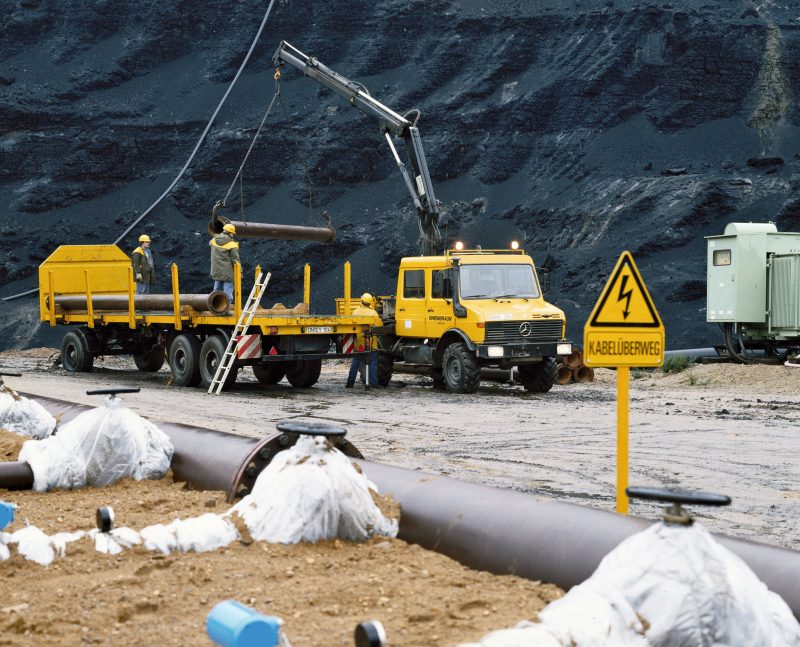 You can have a full-agricultural spec Unimog with front and rear three-point linkage (the sort of thing you see on the back of a tractor) plus front, rear and lateral PTOs to run sawmills, balers, and log-splitters. The rear body can be had in a three-way tipping design, which is incredibly useful and is achieved by way of installing and removing various retaining pins. It’s clever and tough and makes runs to Jewson for bags of sand a doddle.

Atkinson Vos is the best-known Unimog specialist and having spoken to them and spent some time looking at its stock I’d struggle to recommend anyone else. Yes, they’re a bit more expensive than some of the others but I came away hugely reassured by what I saw and the quality of the pre-sale inspection.

If you’re buying privately, I’d avoid anything that had been used to spread salt or haul logs. The former will be encrusted with rust while the latter will probably have been over-worked and under-maintained. Of course, what you want is a privately restored, low-mileage, cherished example and they are about, even if they aren’t terribly easy to find. 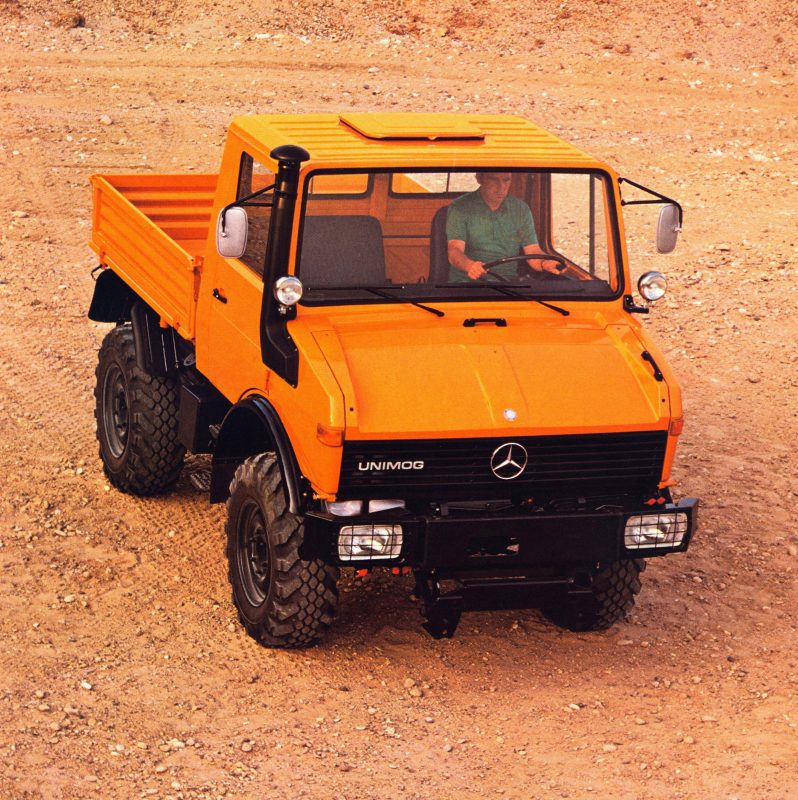 Yea, you can put wider and taller wheels on your Unimog but customising in this sense means making it fit for your purpose. As an example, I’m on the lookout for a U406 with front and rear PTOs, a rear three-point linkage for a mower and sawmill, plus a three-way tipping body. At a later stage (translates as “when I’ve got more money”) I’d like to add a front linkage for a snow plough and maybe a hydraulic crane for hauling big logs.

Madness? Maybe, but don’t forget that garden-sized agricultural stuff is expensive because poncy middle-class blokes buy it because they’re too scared to step up to the plate and spunk out hard cash on the full-size stuff. As an example, a Honda-engined flail mower that you can tow behind a quad bike costs about £1,500 new and not much less secondhand but an agricultural flail mower that needs a three-point linkage to mount it and a PTO to drive it will be well under £500. Depending on how much stuff you need, the savings can add up to a significant proportion of the cost of buying a Unimog. (Of course, a cheap £3,000 tractor makes the sums work even better, but I won’t tell if you don’t…)

Rock-crawling enthusiasts could strip all the extraneous stuff off (not that there is much) and fit a huge hydraulic winch to rescue Land Rovers at their local Pay ‘n’ Play site. Or you could turn one into a slow-but-unstoppable adventure motorhome to tour the world in. And, of course, prices are rising, albeit slowly, so you should get your money back when the time comes to buy your next toy.

Oh, and that low-revving 85bhp engine can be tuned to deliver 125bhp by upgrading the injector pump, which sounds like an easy way to turn awesome into staggering. Just sayin’.

If you can’t spring £10k from the family savings to buy a Unimog there are other, cheaper ways into the whole ownership experience. The first is the simply brilliant LEGO Technic model. It’ll set you back about £250 but is worth every single penny – and, if you let the kids help you build it, they can apply all sorts of familial pressure to help your cause.

The second is with a Tamiya 1:10 remote control Unimog. Not quite as awesome as the LEGO version, it is, nonetheless, a thing of beauty and wonder.

Finally, the MB Trac is essentially a Unimog that looks like a tractor. Bugger all use on the road but owning one scores you extra cool points with the anoraks and buying one is a cheap way into all that mechanical loveliness.