The Lotus Seven started life in 1957 as a stripped-to-the-bones, low budget racing car and inexorably moved its way through four iterations, ending its life in 1973 bogged down with such fripperies as a heater and a face only a mother could love.

The basic premise was so popular that the Lotus Seven is the most copied production car of all time with more than 160 manufacturers having offered variations on the theme over the years. (There must be some good ones out there, but with the possible exceptions of the Donkervoort and Westfield, I can’t think of any.) 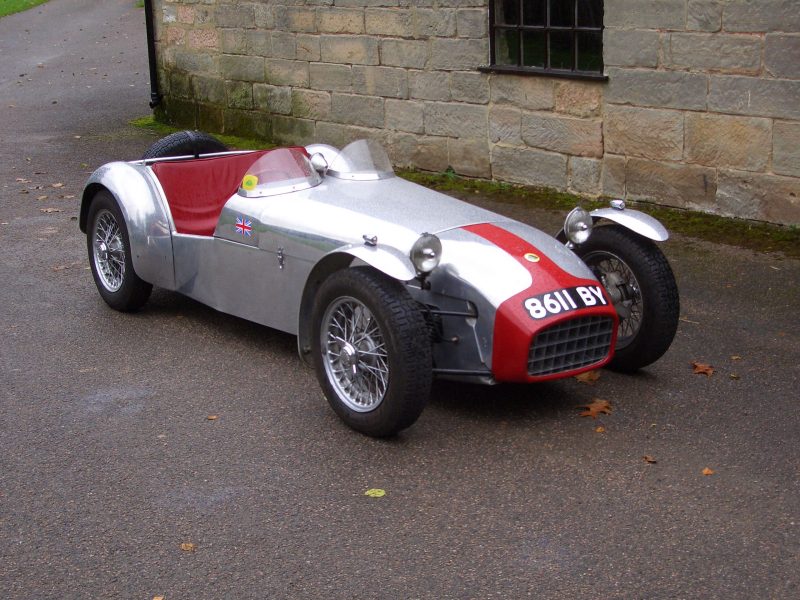 The series one was in production from 1957 until 1960. It was a tiny, simple thing with a bench seat and skinny little tyres, a million miles away from the car that bears its name today.

It wasn’t that quick either; the power available depended on the engine you chose but even with a choice of three you could only opt for 28bhp, 40bhp or a giddy 75bhp. Still, with a lightweight tubular chassis and aluminium panels – of which there weren’t many of course – this was still enough to give sparkling performance and outstanding handling. The benchmark acceleration varied from 9.2 to 19 seconds and the top speed was 78mph to 104, which was more than enough given the drum brakes that were fitted on all four corners.

These narrow, high-walled tyres might not have gripped very hard but they were utterly predictable and gave as much feedback as even the best driver could process, something that the feather light weight helps. How heavy? Well, the heaviest was just under 420kgs, which makes the modern Elise look like a proper bloater.

The price to buy a brand new one back in the day was £500 if you built it yourself, or £1,000 if you bottled it and paid a man at Lotus to do the work you should have done yourself. Lotus sold just 240 of them, making them the model of choice for the collector and purist alike. 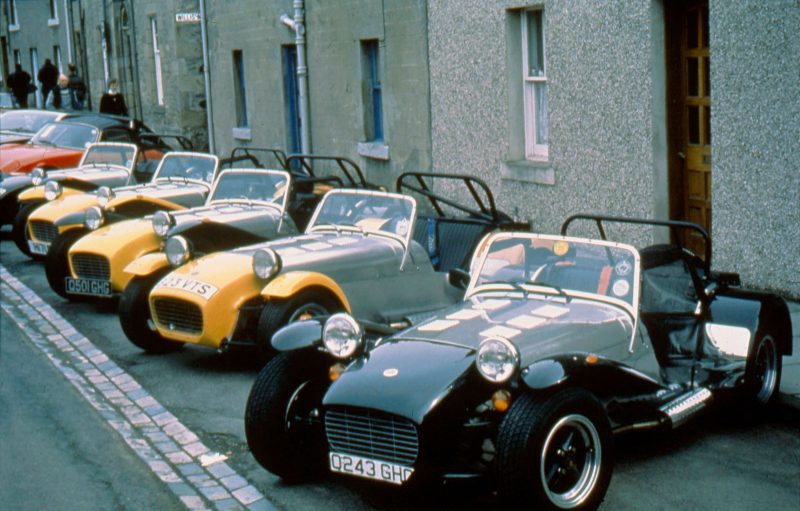 Now that Lotus knew it was onto something the aim shifted from engineering to cutting costs; yes, the Age of the Accountant had arrived so the gorgeous aluminum bodywork was now slightly less gorgeous aluminium and glass-fibre.

The range of engines was broadened and now included a heady 80bhp option that dropped the 0-60 time to 6.9 seconds, proving comprehensively that low weight rather than outright power is the key to performance.

Lotus had built or supplied a total of 1,350 by the time production ended in 1968 and rumour has it that they might even have started to turn a small profit on them. The series 2 is bought by wannabe track-day heroes.

If the series one was the pinnacle of purity and the series two was the ideal track weapon, the series three balanced its on- and off-road prowess in the most convincing way of all.

It’s an achingly pretty thing too and is the model on which the modern Caterham Seven is based. This makes it all the more surprising that only 340 were built between 1968-69, although the relatively high purchase price of £1,225 might help explain the low take up. Pragmatists buy the series 3. 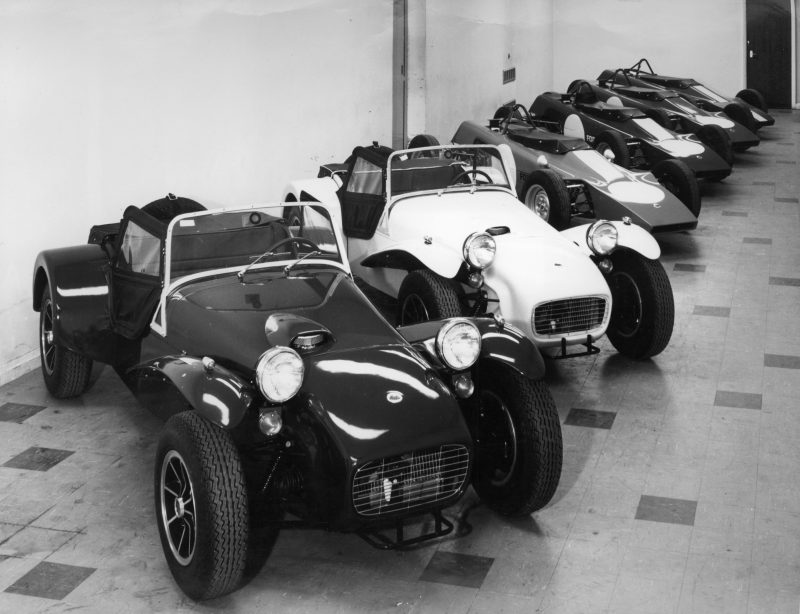 The series four was an all glass-fibre, squared-off accountants’ wet dream. It was cheap to build, mainly because it fell out of the ugly tree and hit every branch on the way down before being beaten mercilessly by the ugly stick while it lay on the floor bleating and begging for mercy.

It is the heaviest of the generations too, weighing a positively lardy (by Seven standards) 600kgs, so the 72bhp engine struggled to haul the Seven to 60mph in anything less than nine seconds, although the top speed had risen to an almost-unusable 110mph.

It died by way of a well-placed bullet in 1972 after being in production for just two years. Mind you, it sold an astonishing 664, which proves that there are at least 664 people in the world for which being completely blind was no obstacle to Lotus Seven ownership

If you can ignore the looks then you are an imbecile, but an imbecile that will enjoy driving it more than you might imagine. It also sells for half the price of its better-looking siblings. Tight-fisted blokes masquerading as canny investors are starting to snap up the series 4, sniffing the chance to make a few quid when they come to sell it. Let’s hope they make enough to compensate them for all those years when everyone was sniggering at them, eh? 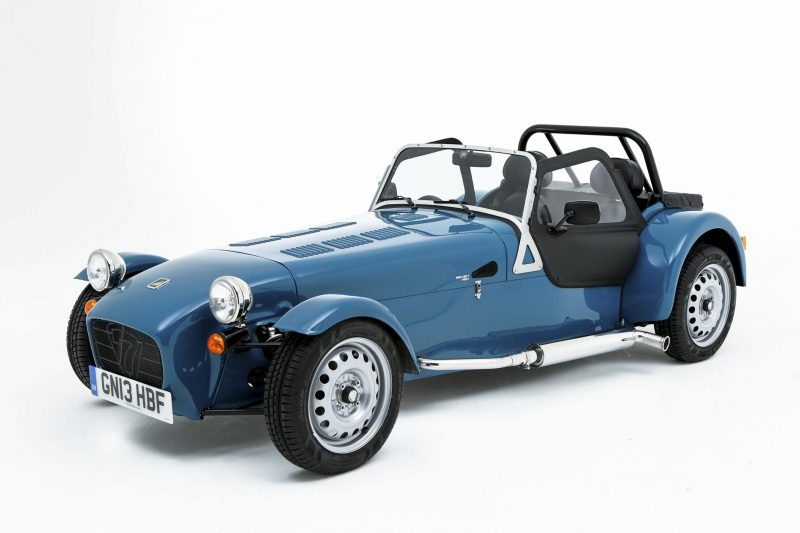 The right to use the Seven name and design passed to Caterham Cars in 1974. The Caterham range has kept pace with the ever-expanding market for track-day toys and there is now a bewildering number of variants. However, as a rough guide the more you pay, the more it is going to hurt when you crash. (If you have the talent to exploit everything that the 620R has to offer then Caterham is going to give you one plus a factory drive.)

Those in the know suggest that the basic Seven 160 is the one to go for. Obviously, you need to save yourself £3,000 and build it yourself. Or, even better, ‘invest’ the £3k in new tools and then build it yourself for the ultimate win/win. 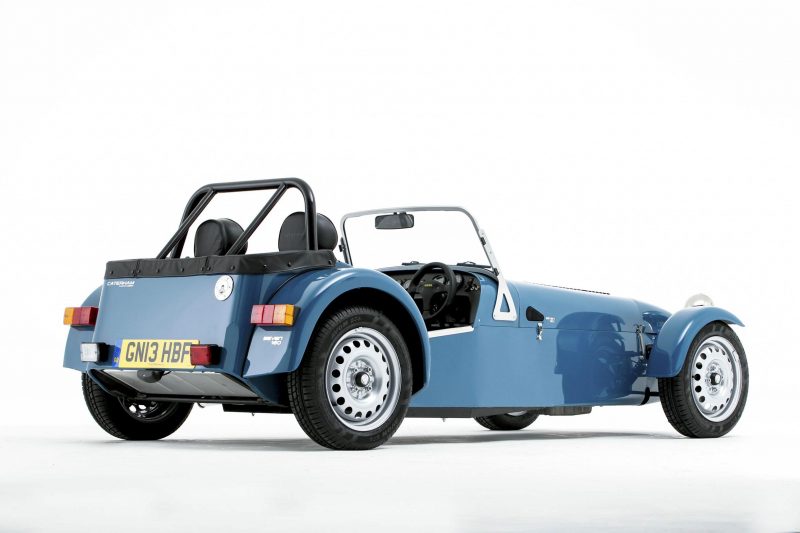 Driving a Seven of any age is a challenge; you are knee-high to a hatchback and only a slight impediment to forward motion in an HGV; couple these with the fact that weatherproofing is almost non-existent and you’ll start to understand that driving one has more in common with motorcycling than driving. (An early car doesn’t weight much more than a Honda Goldwing, either…)

Cars of any age are slower on paper than you think, but the way they feel on the road is also much faster than you imagine, which evens things up a bit, possibly even leaving you on the Slightly Intimidated side of the scales. Steering is almost telepathic in its instancy and while the brakes might sound very period, they have the square root of sod all to stop, so work more effectively than they have any right to.

The greatest challenge is physically fitting into one. I am a hefty 6’3” and simply can’t squeeze my size thirteen shoes into the footwell, much less operate the three pedals that’re squeezed in down there. I’ve tried a Caterham Fat Boy Special but even that is a bit tight, so the larger gentleman (or proper Bloke-shaped chaps, as they are more properly known) might need to look elsewhere. Like a Unimog.

Everyone else should be OK as long as you don’t mind packing light if you’re intending on stopping overnight in it. (And are happy to shop at a chandlery for your outer clothing.) 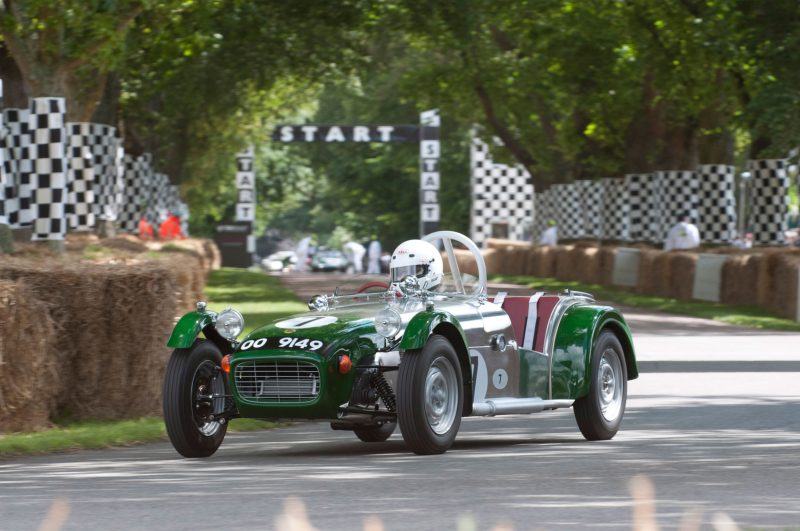 A Lotus or Caterham Seven’s top speed is a direct inverse correlation between the penis size of the owner. Anything over 80mph is pure torture and essentially unusable so the sane and adequately endowed focus on acceleration rather than top end. With only conventional tuning, most should be able to hit 60mph in five seconds or so, even on a tight budget.

The other thing Viagra munchers mess up is the handling, mistaking outright grip for balance. The Seven was never about lateral G; it was always about balance and feedback and sublime steering so don’t go too stiff on the springs and dampers or too wide on the tyres. You’ve got a lovely low centre of gravity and a low polar moment of inertia, so you don’t need to go over the top. Remember: what is good for ride is also generally good for handling, something Colin Chapman never forgot. 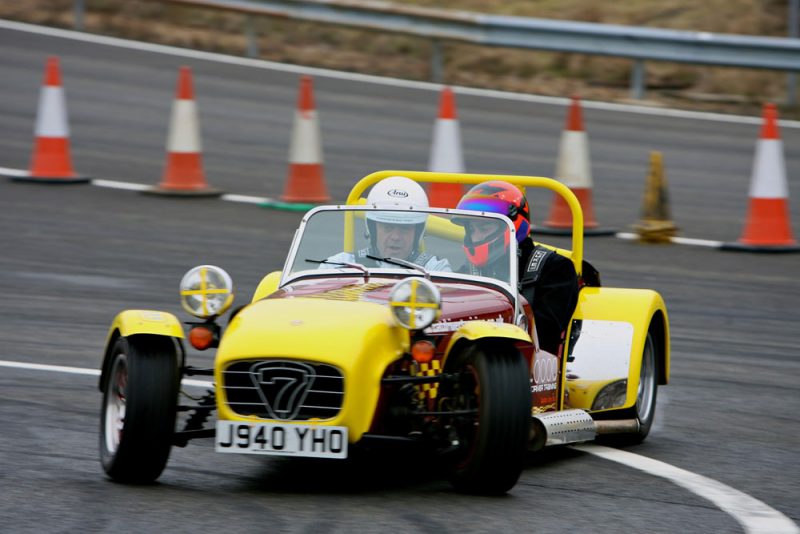 Engineers love the Seven, so if you’re buying one that’s been cherished and rebuilt by a bloke who keeps his pens in a pocket protector then you’re onto a good thing. Otherwise you’re looking for originality and accident damage, both of which can send values plummeting.

On a pre-purchase inspection it is the little things that can reveal so much, so beware of anything that looks bodged or inauthentic; my pet hates are mis-matched tyres and crimp-on electrical connectors. I’m not saying I’ve never bought a car with them but a well soldered joint and high-quality, matching tyres give me an awful lot of reassurance that the owner really is as meticulous as he/she claims to be.

Prices start at the £10,000 mark for an original Lotus Seven series four, which makes more sense to me that paying the same amount for a tatty Caterham, mainly because prices can’t languish forever. While only a fool buys a car as an investment, if you can turn a blind eye to its challenging looks you’ll find that it’s got a lovely personality and is very good with the kids, as they say.

The series 2 and 3 cars are starting to fetch good money and you’ll need to find £20,000 plus to get a good one. The series 1 cars are utterly gorgeous and massively desirable, so you’ll be looking at £35k+ and rising to put one in your garage. I think they’re probably still cheap even at that and I expect to look back in the not-too-distant future and discuss how reasonably priced they were back in 2016.