The Vauxhall Lotus Carlton (or Gruntcarlt as the legendary motoring journalist Russell Bulgin famously called it) is, was, and probably always will be, more a thing of folklore and myth than reality. Capable of 176mph it was the fastest four-door saloon in the world and suffered at the hands of the bourgeois, Daily Mail-reading middle-classes who couldn’t understand why anyone needed a car that could travel at almost three miles a minute, or more than two-and-a-half times the national speed limit.

Their case was strengthened throughout 1993 when a stolen Lotus Carlton was used in a series of robberies and thefts throughout middle England. The police, rather than trying to do something about it, just rolled over and whinged that their patrol cars couldn’t keep up: “We simply haven’t been able to get near the thing and it looks unlikely that we ever will,” PC David Oliver said. “Our urban panda cars can only go at 90mph, but we also have a policy of not getting involved in chases. If we did that, the thieves could kill themselves or someone else.” 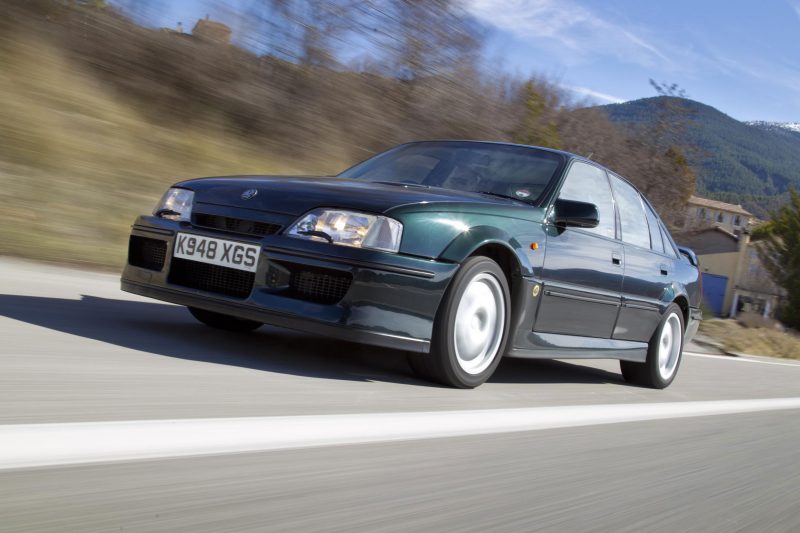 Welcome to England in the nineties, a time when the music was crap, politicians uniformly grey, and the best dance was the Macarena. The cars, on the other hand, were frickin’ awesome. As well as the Lotus Carlton, well-heeled car enthusiasts could choose from an Audi RS2, Sierra Cosworth, and the Mercedes-Benz 500E. Not to mention the Honda NSX, McLaren F1, Bugatti EB110, Dodge Viper, and Jaguar XJ220.

But it was the Lotus Carlton that dominated our working class hearts and minds, thanks to a 20% power advantage over the BMW M5 of the day. Not impressed? Well then, how about a 58% torque advantage? Yes, the Lotus Carlton’s 377bhp and 419lb ft might look distinctly lukewarm now but back-in-the-day they were feral, proof that Vauxhall was the irresponsible lout of the automotive business. It might have been a blue-collar hero in the Springsteen mould, but make no mistake; this was a tooled-up Johnny 99 rather than Girls in Their Summer Clothes.

Lotus, normally the most subtle of engineers, must have been at the Special Brew on the day they designed the Carlton because they enlarged the Vauxhall 3.0-litre straight-six engine to 3.6-litres and strapped not one, but two turbochargers to it. Power rose exponentially, so they fitted the six-speed manual ‘box from the Corvette ZR-1 and a limited-slip diff to handle the power that was now being channeled through the rear wheels.

High-speed testing showed that the existing multi-link suspension was well up to the job of keeping everything under control, even at the much greater speeds and suspension loads that the new engine was capable of generating. However, there were some problems with camber change when the car was fully laden and being driven quickly (presumably five-up on the way to the kebab shop). The solution was to fit the self-levelling rear suspension from the Vauxhall Senator, which cured it at a stroke.

AP supplied the Group C-derived braking system, which retained the standard ABS and featured four-piston calipers gripping 13-inch discs at the front and two-piston calipers and 12-inch discs on the rear. It stops quite well, even now when you compare it to new machinery, thus dodging one of the most frequent complaints about driving classic cars when you’re used to the sort of powerful and easily modulated anti-lock braking systems that are fitted to even the most mundane of cars nowadays. 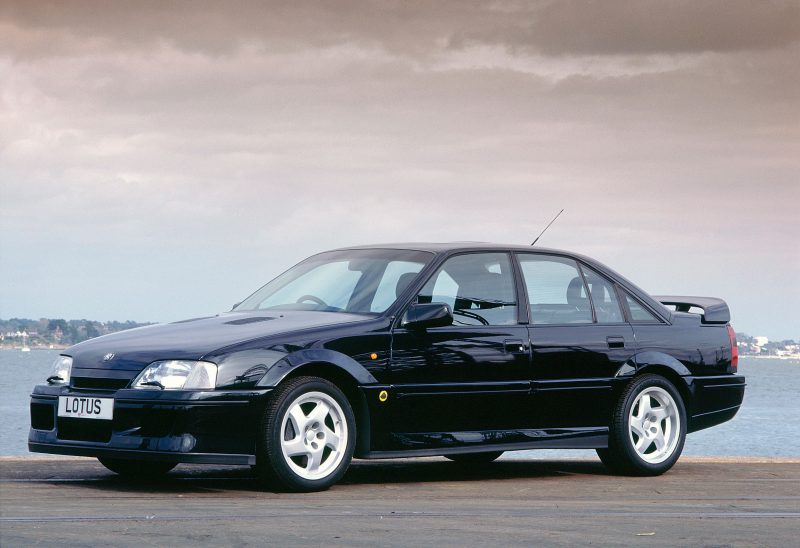 The engineering team must have then moved onto Tequila shots, because no one at either Vauxhall or Lotus thought that even a rudimentary traction control system would be a good idea. As a result, the Lotus Carlton can be a bit of a handful, especially in the wet.

The chaps at Lotus must have woken the next day with an almighty hangover, because they couldn’t be arsed to do anything with the way the Carlton looked, restricting the exterior changes to flared wheel arches to cover the 235/45 and 265/40 17” tyres and a subtle, wind-sculpting body kit. They also decided to paint every single one in Pearlescent Imperial Green, a colour that looks black in anything other than direct sunlight, presumably because anything brighter hurt their morning-after-the-night-before eyes.

They then spent the afternoon sleeping off their hangovers, leaving the YTS boy in charge of the interior, which is the only possible explanation for an interior that only betrays its intentions by way of an 180mph speedometer and some ruched leather.

Once the team had sobered up and signed off the project (known internally as the Lotus Type 104) it was only fitting that Lotus itself was entrusted with building the Carlton, which meant shipping complete Vauxhall Carlton GSis from Germany – pre-painted and with ventilation holes drilled in the bonnet but otherwise standard – to the old DeLorean development shop at their Norfolk HQ. The engines and gearboxes were removed and shipped back to Germany and a small team then devoted a solid 150 hours to converting a mass-produced saloon car into a hand-crafted super-saloon.

The result was sublime. Aside from a heavy clutch and a slightly agricultural gearchange, the Lotus Carlton drives as easily as the 3.0-litre GSI car that it started out in life as. Dry road grip is phenomenal, and only the clumsiest of drivers would have anything to fear. Then rear end can be provoked in the wet, and if you’re provoking a car that was fuelled by Special Brew then you deserve the ensuing slap. Body roll is reasonably well controlled, but you are never in any doubt that pitch and roll are of a greater magnitude than would be tolerated in the equivalent car now. 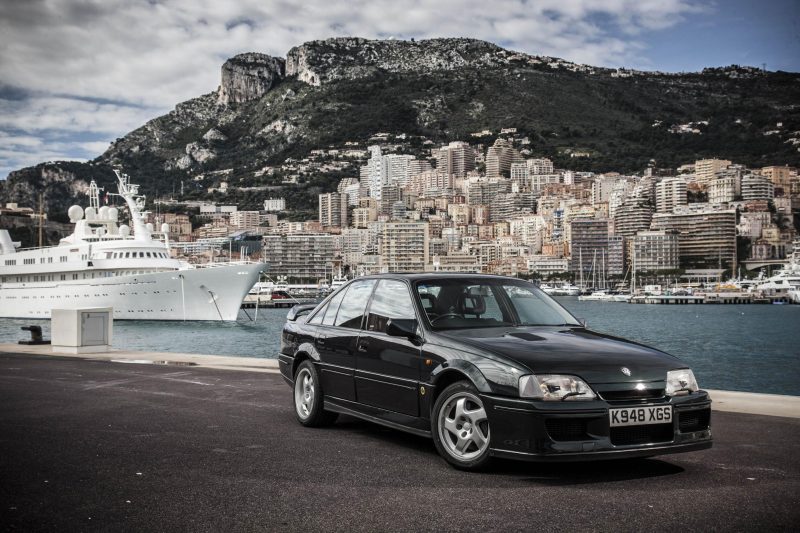 There is much more to the Lotus Carlton than its mighty top speed; 60mph comes up in around 5.1 seconds, with 100 coming up in just under twelve. Autocar tested the one back in 1992 and found that they could take it from rest to 100mph and to rest again in 17.2 seconds, a figure that was only bettered by Nick Mason’s Ferrari F40 (15.9 seconds). “Hammer of the Gods acceleration” was how Bulgin put it. Yet this is a car that was designed for inter-continental ballistics, rather than a high-rev screamer that you can torture with impunity, so it’s better by far to use all that torque and short-shift through the gears in a 2-4-6 pattern, surfing the tsunami of torque.

Just 320 right-hand-drive cars were sold at around £50,000, well short of the 440 units that Vauxhall’s market research suggested could be sold. Potential owners lost their bottle and either cancelled their order outright or asked to be moved further down the waiting list while they tried to convince themselves that they weren’t about to make a monumental mistake. In the end 950 were built worldwide, someway short of the 1,100 Vauxhall predicted. (The McLaren F1 suffered a similar fate. I guess when John Major is your Prime Minister it’s hard to draw much joy from the world.)

Buying a Lotus Carlton is straightforward; mainly because there is only one trim level and one colour on offer, freeing your mind to concentrate on the importance of not buying a duff one. You are looking for straight, original bodywork, a good interior, and tight mechanicals. A good – no, make that impeccable – service history is vital if you are to ward off future bankruptcy, so I’d avoid anything that triggers even the slightest of tickles on your Early Warning System.

The gearbox can be a bit noisy, but unless you have to use both hands to get it into gear it is probably fine. The clutch, on the other hand, should be as stiff as buggery, because if it isn’t then you might be looking at imminent pivot pin or bell housing problems. It’s not a deal breaker, but you’d expect the price to drop by a few thou’ as compensation.

The other problematic area is the body kit. Lotus didn’t necessarily rustproof the mounting holes they drilled as carefully as they could have, so there is a good chance that the steel underneath the fiberglass body kit is lighter than it should be. Again, not a huge problem but the price needs to reflect the work you’ll need to commission to put it right. 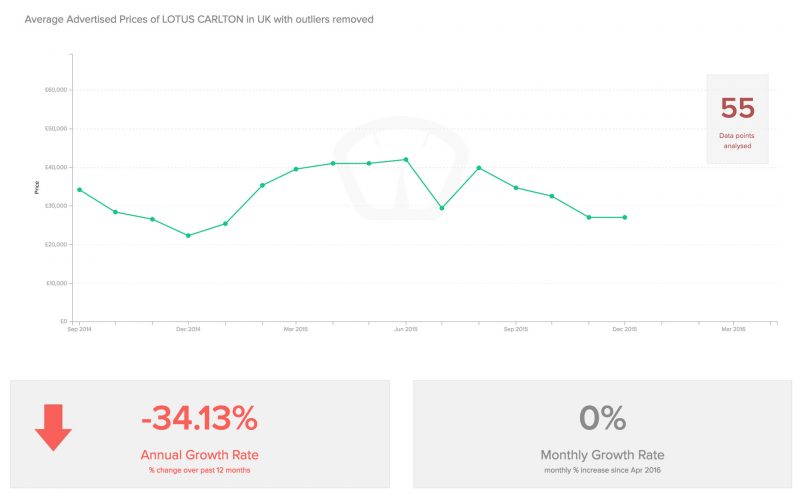 I suspect, given the small numbers involved, that’s a statistical blip rather than a long-term trend. However, it might be a useful stat to use as leverage to get the asking price down a little, making Gruntcarlt even better value, and possibly even a nice little earner.

Timing chains can snap, so a replacement would be a prudent first move once it’s safely ensconced in your garage, as would a bloody good service. Most parts are still available, at a price.

And if the price doesn’t rise, you can always moonlight as a cigarette thief; after all, you’ve got nothing to lose as PC Oliver has gone on record to confirm that the Old Bill won’t be chasing you… 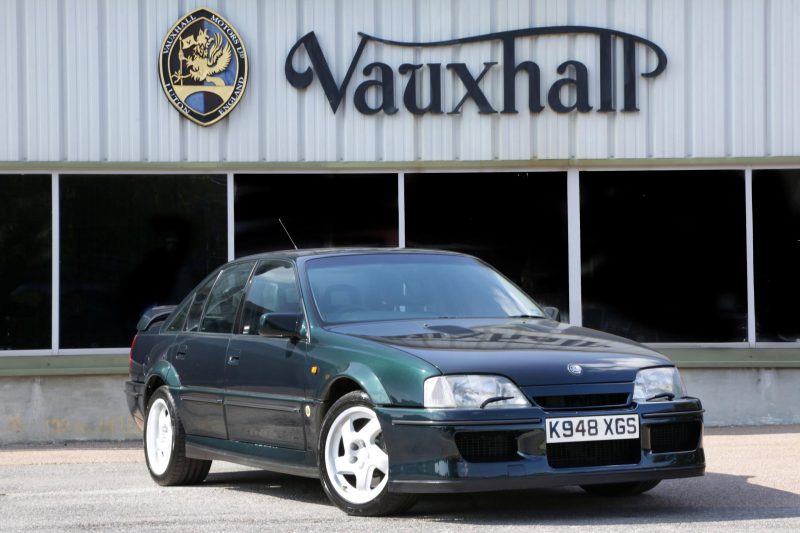 Of the 320 cars that were originally sold in the UK, just 88 remain taxed and in use with a further 87 on SORN, which means that most of the cars that remain will be known in enthusiast circles, which should help with picking a good example.

You could have bought a very usable example for under £10,000 back in 2012 but you’d have to pay twice that now, with the very best examples fetching nearer £40,000. That still seems like fine value to me, especially using Patina Price Trends we can see that that values have fallen in the past twelve months.