The Skyline GT-R: why they call it Godzilla

I’ve said it before and I’ll say it again; the best cars only need the one name to describe them to other petrolheads: 911, NSX, F1, 6R4, E-Type, and Countach to name just a few. The Nissan Skyline GT-R, on the other hand, still qualifies even though it can be referred to with three: Skyline, GT-R and, of course, Godzilla. Just roll that around your tongue for a few seconds: Godzilla. Godzzzillla. Who wouldn’t want to drive a car called that? I’m not saying for a moment that the GT-R isn’t a fundamentally pretty useful old thing but would it have achieved such legendary status without THAT name? I’m not sure, which is much the same as being sure, when it comes down to it.

Born in 1964, the original Skyline GT-B was a tasty bit of kit made even tastier with the second-generation car that finally gained the infamous GT-R moniker. The early cars are so rare and hideously expensive as to preclude them so we’re going to stick with the R32, R33, and R34 models, models that are still plentiful and cheap enough to guarantee their iconic status among car enthusiasts today. 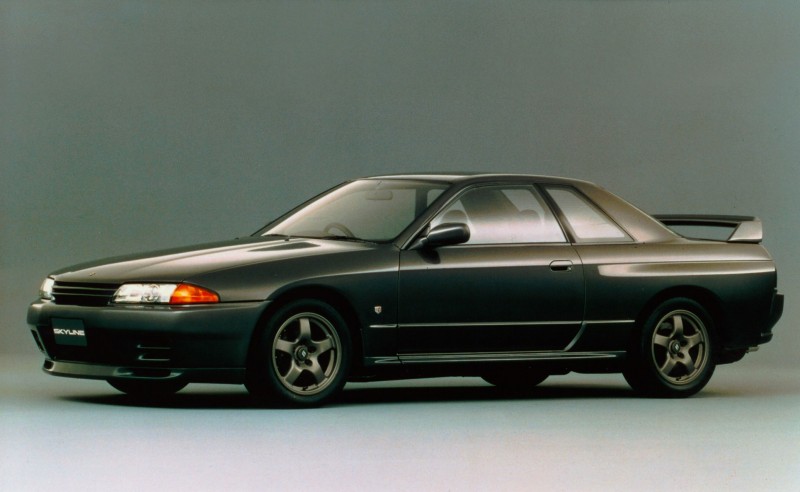 The R32 of 1989 was a performance bargain, mainly because Nissan lost money on each one. While such a position isn’t without precedent – McLaren lost money on every F1 it built despite the infamous $1,000,000 price tag – it is unusual. With four-wheel-drive and a nominal 276bhp from the 2.6-litre straight-six engine, the R32 was so much a car of its time that it effectively had no competition. While Honda might have had the all-aluminium, titanium con-rod, VTEC NSX and four-wheel-steer Prelude, the GT-R had a 16-bit micro-processor to control the all-wheel-drive system, and a computer-controlled car trumped anything else in the early nineties, no matter how nicely engineered it might have been.

It was a true racing car for the road and the public lapped it up. So dominant was it on the track that it eventually raced with a 140kg weight penalty and it still dominated, even with the equivalent of a fat bloke strapped into the passenger seat for every race, and was eventually out-manoeuvred with a ban on turbocharged engines AND four-wheel-drive. So it raced as a rear-wheel-drive car – and still won. 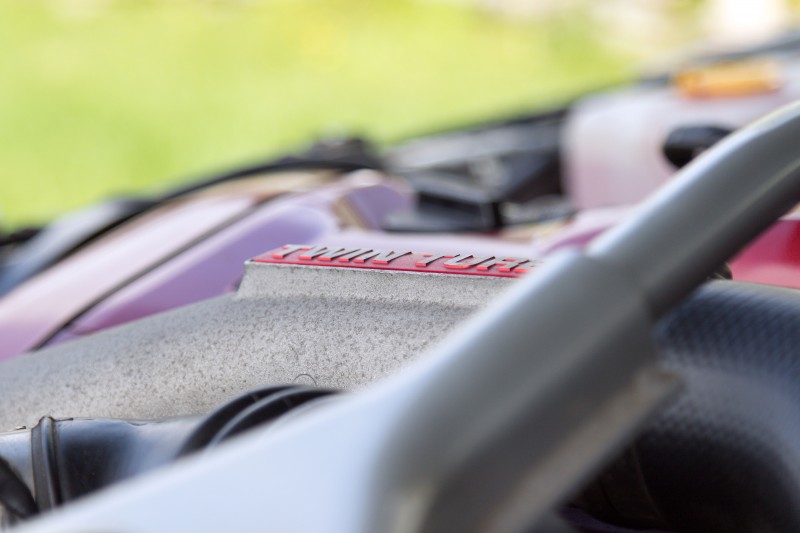 Tuners found that the theoretical 276bhp was more like 300, but if that wasn’t enough then even that could be easily boosted to 1,000bhp or more, with the only limiting factor being your wallet and willingness to rebuild the engine at regular intervals. Four hundred bhp was ridiculously easy and reliable, endowing the car with astonishing performance, while 600-800 wasn’t at all unusual.

The all-wheel-drive system, called ATTESA (Advanced Total Traction Engineering System for All-Terrain) is worth special investigation. Essentially a rear-wheel-drive gearbox, the system monitors a variety of parameters including G-force, throttle position, boost pressure and the grip that each individual wheel has and constantly shuffles power around to maximise traction no matter what the conditions. The result is eerily effective and flatters even the most ham-fisted of drivers, something that, alongside that terrific nickname, ensured its commercial success.

The R32 was beautifully simple and weighed just 1,430kg, ensuring that acceleration at any sane speed was simply a question of pressing the throttle until your chosen speed appeared on the dial. A standard car could hit 60mph in 5.5 seconds and go on to a top speed of 155mph, but really, the GT-R has never been about straight-line performance, has it? 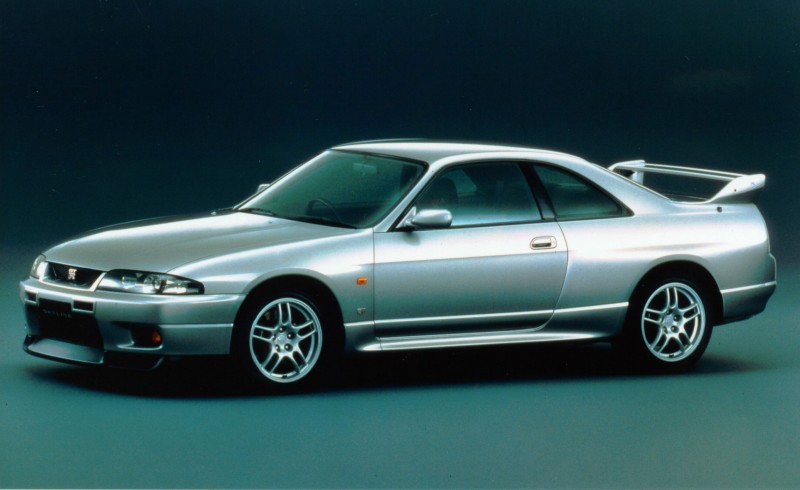 1995 saw the introduction of the R33, a slightly softer, heavier, slower, and more consumer-focused version of the R32 that retained all of the earlier car’s good stuff while losing its harder edge, something it might have got away with if it had added something to the mix. It didn’t so it is, was, and is likely to remain, over-shadowed by both its father and its son. Some people say it is more tractable and benefits from an updated and improved chassis, but then some say a chipped BMW 320d will outrun an R32.

The R34 was introduced in 1999, instantly reinstating Nissan’s bonkers reputation quickly becoming a hero of both film and computer games, securing its place in the automotive Hall of Fame as a result. While retaining a distinctly analogue feel, the R34 bristled with even more high-tech than its predecessors and came complete with around 328bhp, despite an ‘official’ output of 280bhp. 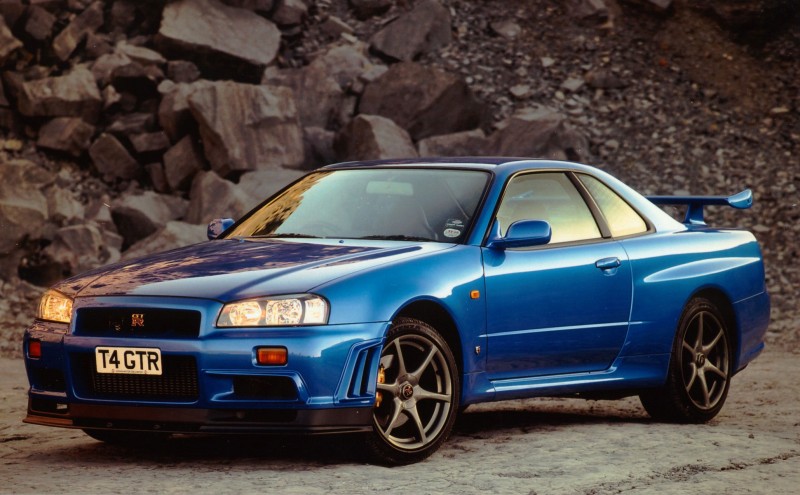 (By-the-by, the limitation on power outputs had nothing to do with a ‘gentleman’s agreement’ or even safety, and everything to do with the All-Japan Grand Touring Championship, in which manufacturers sought to compete against similarly powered cars to keep costs down. In the end, they all cheated and claimed that their cars only developed 276bhp, despite the reality often being very different.) 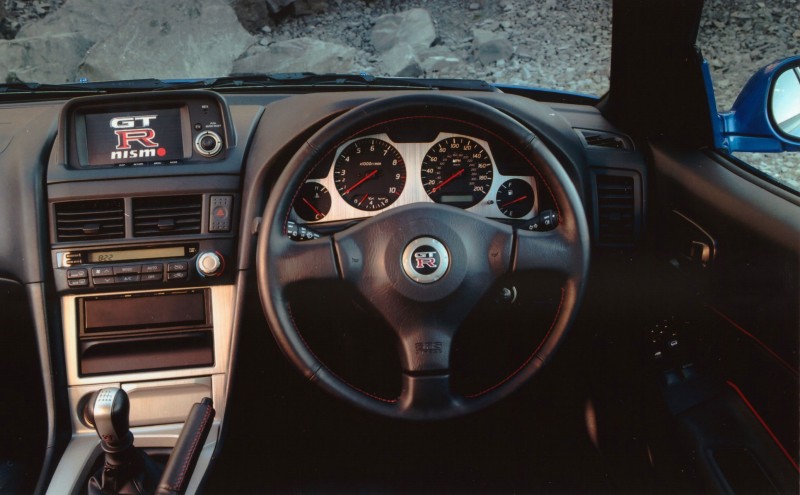 The interior isn’t a high point; while the seats might be all embracing, the quality of the plastics is absolutely aligned with every other Japanese car of the nineties. Of course, the bit we all remember is the 5.8-inch dashboard display that shows essential dynamic information like the turbocharger’s revs, the exhaust manifold temperature and a G-meter. Really, of all the things that fired my thirty-something mind, that was the killer must-have feature. (I’m now in my forties, and it’s still a killer feature that I enjoyed using as much as my 11-year-old son enjoyed monitoring.)

The M-Spec was named after the legendary engineer Kazutoshi Mizuno who was in charge of the Skyline development team from 2000 on. It featured “Ripple Control” dampers for improved handling and heated leather seats. All versions monitored the car a minimum of ten times a second, with the V-Spec II upping that to 100 times, shifting the front/rear balance from 0:100 to 50:50 and all points in between as necessary.

As Kazutoshi Mizuno told Top Gear magazine in 2012: “All people have the right to enjoy a supercar and supercar performance. Before, the supercar was a very closed market. I wanted to open the market up. Big boot. Accessible performance. You can drive my car at 186mph with your wife. Before GT-R, it was a dream. After GT-R, the dream was real.” 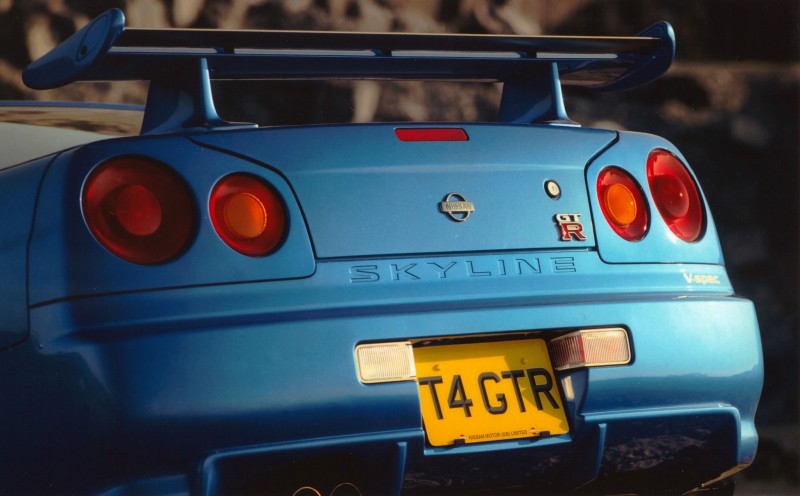 I haven’t driven the GT-R at 186mph, hell, I haven’t even driven one with my wife in the car but Kazutoshi was absolutely bang on the money for accessibility; nothing I have ever driven has made so much speed so easy to achieve. I drove an R34 from Nissan’s heritage fleet recently and was stunned by how easy it was to corner at mind-warping speeds along the north Walian roads I call home.

In the damp, my initial clumsiness was inducing understeer; the front-heavy weight distribution that sees 57% of the car’s not inconsiderable weight resting on the front tyres means that understeer is the dominant handling trait. However, by adopting a slower entry speed and then piling on the power earlier than seemed prudent, I was soon cornering like a champ. I then discovered that the GT-R rewards bigger inputs, bullying, if you like, and you shouldn’t be intimidated by its reputation: this is a car that helps you. Punishment isn’t in its lexicon. (Yes, Porsche 911, I’m looking at you.)

The shuffling of power around the chassis was almost unnoticeable and not nearly as synthetic as it is in the current GT-R – and there was no arguing with the resulting G-forces. Driven properly, there is no oversteer just clearly defined and easily accessible cornering forces of such a magnitude that I felt a little lightheaded at times. 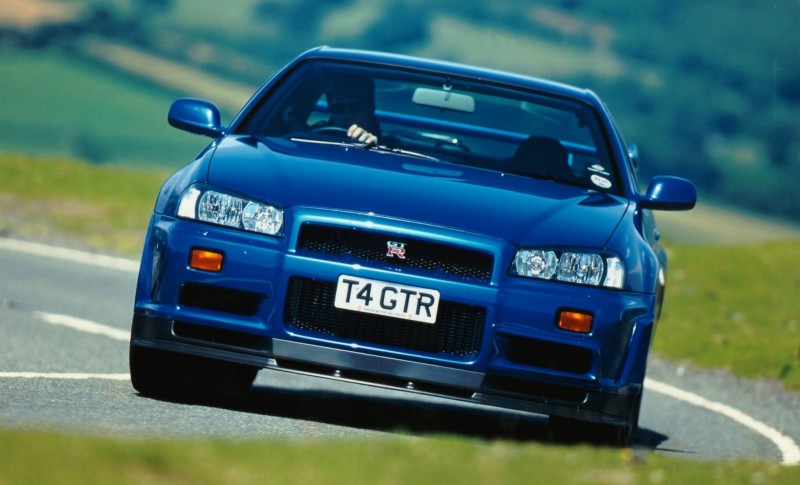 Having driven similarly powered four-wheel-drive cars like the Mitsubishi Evo and Subaru Impreza I can confirm that the GT-R is usefully quicker, and not just because of its (relatively small) power advantage. The output of this bog-standard example felt absolutely spot-on; modified cars might be even faster but I bet they don’t feel this perfectly judged.

Godzilla was always about the grip and not just around corners. The brakes are as effective as the transmission and the suspension. Top-of-the-range Brembos with four-piston calipers up front and two-piston jobbies at the back ensure that there is nothing period about the stopping power, either. That’s unusual, when you’re driving old cars and shouldn’t be dismissed as a side benefit; they’re properly powerful, something that would make a huge difference to the usability of the car – and this is a very usable car that I wouldn’t hesitate to run as an everyday hack. 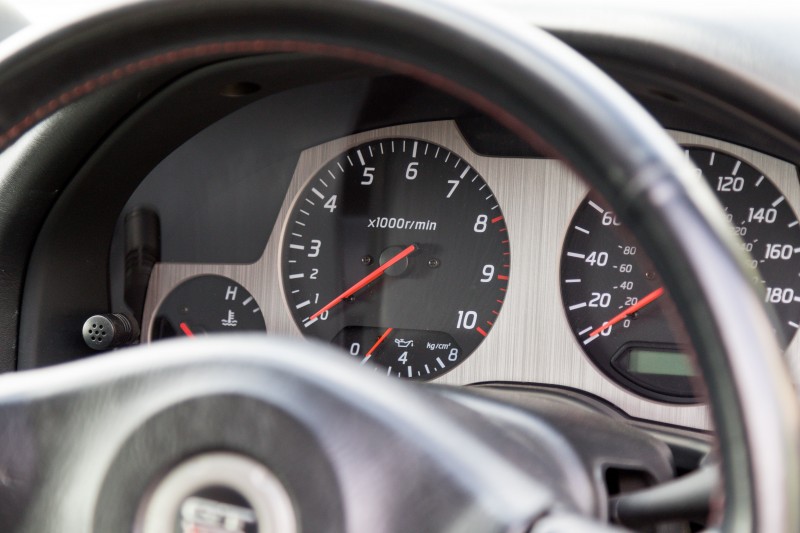 An eight thousand rpm redline means that 60mph comes up in a fraction under 5 seconds, yet the whole experience is visceral and noisy and, contrary to expectations, analogue in feel. The clutch is meaty but not unpleasant in traffic and the gearbox is superb.

The steering is on the right side of firm and the end result is memorable in a way that more modern equipment just isn’t. For just about the first time in my life I didn’t mind coming up behind slower traffic; in a GT-R R34 you can safely relegate them to the status of a mildly inconvenient mobile chicane. You need to keep the revs up, though as there’s nothing on offer until the rev counter hits 3,000, after which it builds steadily and in a beautifully linear fashion.

Almost every GT-R in the world will have been modified to a greater or lesser extent, so it proves an interesting exception to the rule that the best cars are those that are exactly as they came from the factory. If a modification has been done well, then it will probably add to the value rather than detracting from it as is so often the case. Having said that, the paucity of original cars will mean that original cars will fetch a premium: You’ll need to balance driving enjoyment with residuals at some point, but for now I wouldn’t worry too much.

The mechanicals are as tough as old boots and as long as the car you’re looking at has a decent service history – although with JDM cars being imported at a hell of a rate, few will have a full service history – there is little to worry about. Silly levels of turbo boost will lead to engine problems but 600bhp seems to be fine given the bulletproof nature of the bottom end.

The price of R32s has risen steeply lately (check out the changes with Patina Price Trends, and you’ll need to budget between £12-30,000 for a good example. R33s start at £10,000 and rise quickly to more than £50,000, while an R34 will set you back between £15,000 and £60,000. That’s a lot of money, and your investment isn’t necessarily safe given the complexity, and therefore cost, of the engine and drivetrain but most think it’s worth the risk for the sheer pleasure that’s available. 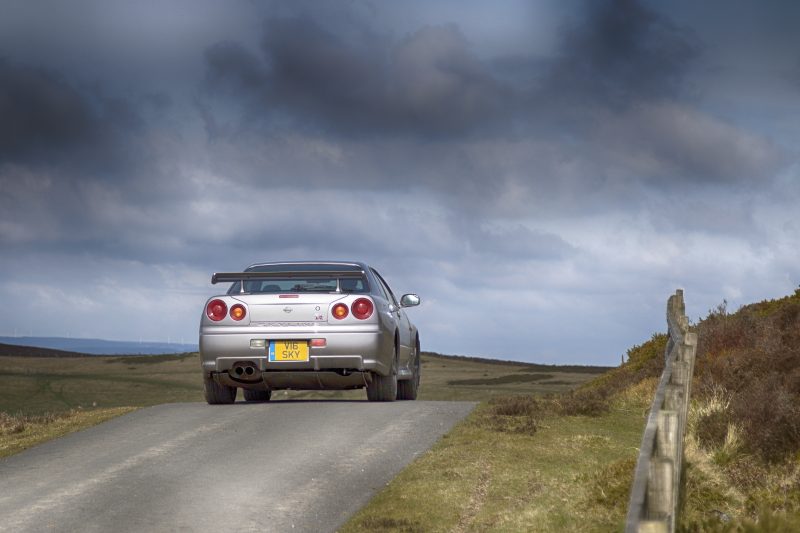