Ford Granada MK I – 70s Britain at its best?

“Get yer trousers on, you’re nicked!” Just one of a number of iconic lines delivered by the late John Thaw in his role as DI Jack Regan in The Sweeney, one of the few 1970’s cop shows that still looks fresh and contemporary when watched with 21st century eyes.

But while the genius of the script writers has to be acknowledged (“We’re The Sweeney, son, and we haven’t had any dinner. You kept us waiting, so unless you want a kicking you tell us where those photographs are.”) it’s the cars that really get our juices flowing when we stumble across a re-run on TV. Which is odd, because most of them weren’t, er, very good. I’ll concede that the Jaguar XJ6 was a proper goer, as was the BMW 525, but the rest of them read like a Who’s Who in the British Hall of Shame: a Morris Marina, a Wolseley 1500, or a Ford Zodiac aren’t exactly the stuff of dreams, are they? 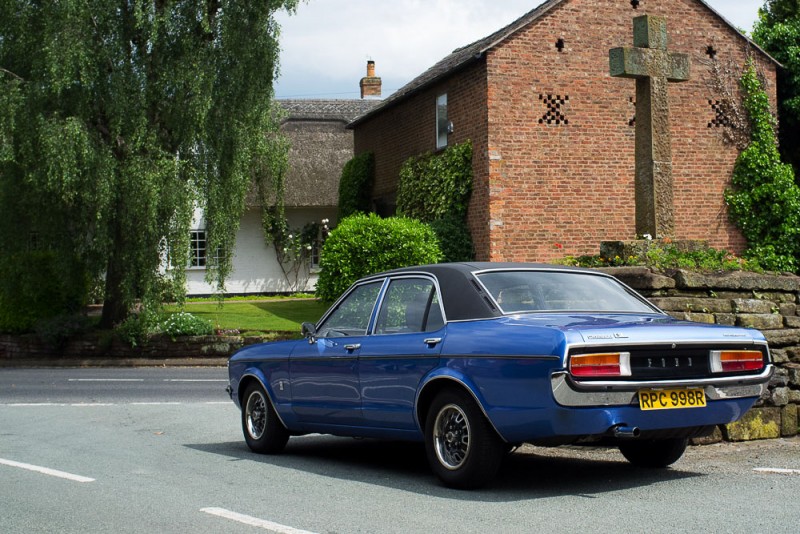 Unlike the Ford Consul GT and the Ford Granada, both of which are uber-cool and achingly desirable, especially in Copper Brown – or metallic dogshit for those who aren’t fans of Brit cop dramas. The sight of one of these wallowing behemoths squealing around the terraced streets of sarf London with Regan barking orders (“Remember, no guns unless they use ’em.”) from the passenger seat evokes much the same response in men as Steve McQueen in Bullitt: jealousy, admiration, and a deep-seated desire to drive the car in the (ultimately unfulfilled, in my case) hope that some of the cool will rub off.

Driving the original Regan (“Hit ‘im George!”) car – a Ford Consul 3.0-litre with the registration number NHK295M – is impossible as it’s in the process of a lengthy and detailed restoration by a reclusive Sweeney obsessive who is determined to get every last detail right. When it’s finished it’ll be worth a fortune (and worth every penny) but for those with more austerity appropriate budgets, it is possible to get behind the wheel of something worthy of Jack (“Now the question is: do I write my statement and then get drunk, or get drunk then write it?“) for under £5,000. 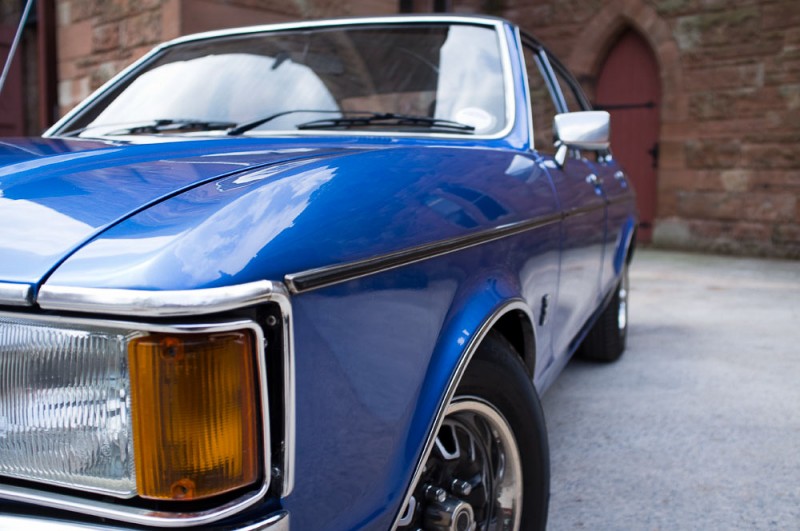 Launched in 1972, the early cars were called the Consul thanks to a threatened lawsuit from the Granada Group. The problem eventually resolved itself in 1975 but until then the Consul name was used for the lower-spec variant of the Mk1 Granada family. However, no matter what trim designation you bought, just four engines were initially offered in the UK: a 1.6 or 2.0-litre V4 and a 2.5 or 3.0-litre V6 engine.

The smaller powerplants developed 77bhp and 92bhp respectively, with the V6 Cologne engines producing 118bhp and 138bhp. The biggest engine mustered enough power to push the Ford to 113mph and a 0-60mph time of 9.1 seconds; this might not sound quick now but it was, back in the day. The Consul was also a little more spritely than the equivalent Granada, which was weighed down with another 50kgs of equipment. A 2.0-litre ‘four’ joined the range in 1975 in search of better fuel economy following the oil crisis of 1973/74. 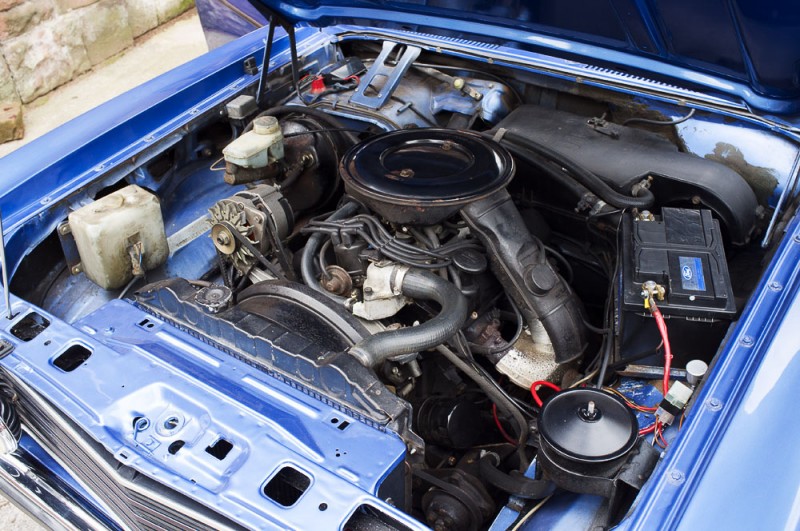 Given their initial poverty status the Consuls are now extraordinarily rare, which is a good thing if you’re looking for an investment but not so great if you’re looking for something to tootle around in on high days and holidays. No, for that you need a Mk1 Granada saloon for the authentic Sweeney experience (“Nah, course I wasn’t scared. Mind you, some bugger peed in my pants.“) leaving the estates and the coupes for someone else to pick up. 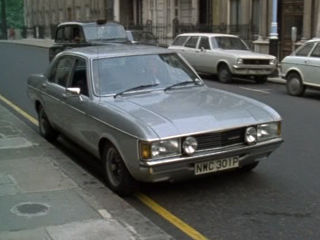 Available in eight flat colours and six metallic, NWC301P, the silver car that Jack Regan (“I’m gonna come down on you so hard your going to have to reach up to tie your shoe laces.“) was driven in in series three gives the Granada the credibility to make it the perfect Sweeny purchase on a budget.

Forget the naysayers who insist on a Consul; the Granada does have the pedigree you need. It’s also available in a variety of trim levels from ‘L’ (no, it doesn’t stand for lowly…) through to Ghia and GXL by way of GT and Rallye, ensuring that everyone from the motorsports aficionado through to the sybarite will be able to get comfortable in a Ford of his or her choice. 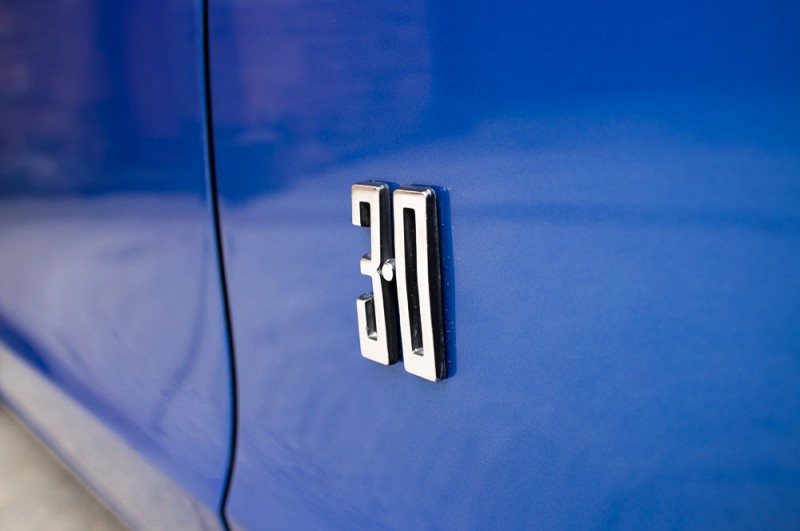 You’re looking for a three-litre V6 manual if possible. As every Granny is going to be way thirstier than your little diesel hatchback, so you might as well go big and noisy. You’ll pay a bit more initially, but it’s the one everyone wants so will hold its value better than something with a smaller engine. If you’re lucky you might even find a genuine Broadspeed turbo, although you’re more likely to stumble across a stash of hens’ teeth being guarded by unicorns…

Given its propensity to rust, it’s highly likely it will have been heavily restored by now so you want to see plenty of evidence that it was done properly: photographs, invoices, receipts and a complete absence of overspray, duff welding and mismatched tyres are the sort of thing that will help you sleep at night. 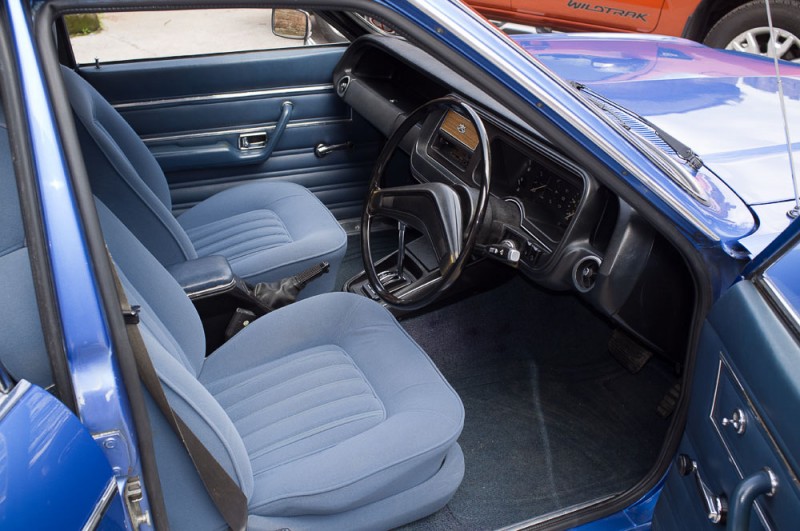 Trim is becoming hard to find, so a car with everything where it should be is worth paying extra for. Seat covers fade and tear after long exposure to the sun, and while they can be recovered, it’s unlikely you’ll be able to match the material exactly. If originality is important to you – and it should be, if you want to maximise your investment – the trim is the one thing (after structural integrity) you need to focus on. Exterior chrome, on the other hand, can be restored fairly easily unless it is heavily pitted, so don’t sorry about scruffy bumpers and minor brightwork.

Anything mechanical is easily repairable so don’t worry too much about a smoky engine or recalcitrant gearbox. These are simple, tough cars that will run forever with a minimum of servicing; change the oil and filters regularly and trouble-free motoring is there for the taking.

If I were buying, I’d want to see evidence that the owner is an active member of an owners’ club too. Without too much effort I found a one-family-owned-from-new three-litre with just 56,000 miles on the clock for £6,500 or close offers, a car that looks absolutely perfect as a drivable investment that is unlikely to lose money in the medium to long-term. 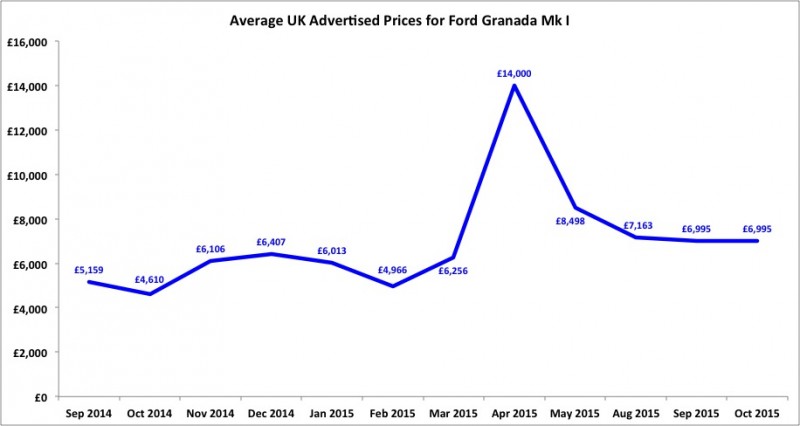 Ok, first things first, don’t get too excited by the chart, there is a reason for the shape! We collect over 200,000 price data points every single month and have a database containing millions of records covering every type of car. Despite this, in some months there was not a single Ford Granada MK I for sale and other months there was only 1. What does this mean? Where we see the chart peak at £14k, this is because of a specific car and is unrepresentative of the market as a whole.

Does this mean that the data is useless? Absolutely not, from the months where there have been several vehicles in the market we can clearly see is that the overall trend is that prices have risen over 20% in just a year. That is much better (and more fun) then money in the bank!

The other takeaway from the data of course is that there are not that many Granadas available and scarcity typically leads to an increase in values. TV made the Granada iconic and we bet that this will underpin values for years to come.

But what are they like to drive? We’ve all driven something old and interesting that turns into something old and uninteresting on closer examination. Well, the good news is that it, like The Sweeney itself (“All right Tinkerbell, you’re nicked!”) stands the test of time very well indeed. I drove a three-litre Granada, albeit one with a slushbox, from Ford’s heritage fleet and came away mightily impressed. It’s not a pretty car but it is handsome in a brutal, quasi-American way. The chrome work on ‘my’ car set off the brilliant blue coachwork perfectly – and who can resist a car with proper spotlights and a vinyl roof? 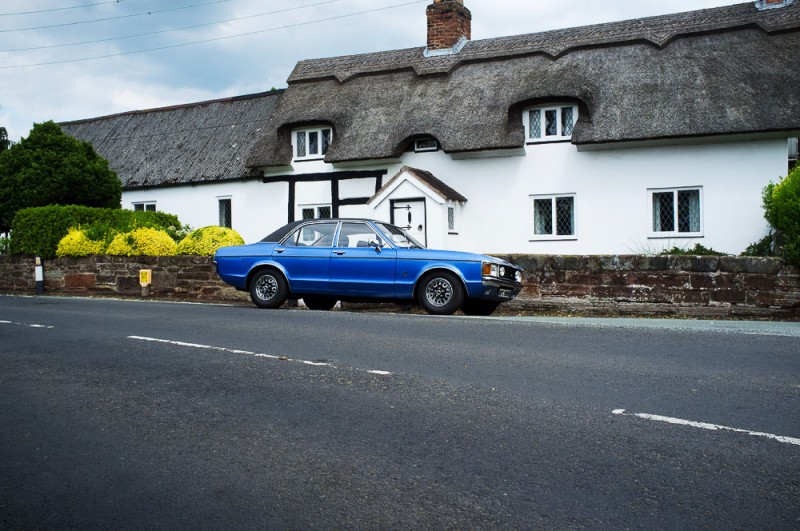 The good news continues inside; it’s not a big car compared to today’s bloated examples but the absence of side-impact crumple zones, airbags, and modern equipment like electric windows and electric seat adjustment means there is more room inside than you might think. The door handle clicks opens with an understated delicacy and precision that I wasn’t expecting and the spindly wheel encourages a deft touch on the move that suits the old girl’s chassis completely; in the same way that Felicity Kendal wouldn’t be your first choice as a companion on an extreme sports weekend this isn’t a car to be thrown around. Sweeney-style (“You nail a villain and some ponced-up pin-stripe Hampstead barrister screws it all up like an old fag packet and pops off for a game of squash and a glass of Madeira.”) oversteer can be provoked on wet roundabouts, but you’ll need to be trying hard to get it. Yet, at sane speeds, the Granada is mightily good fun and hoofing it around the Cheshire countryside in the sunshine was one of the nicest experiences of my motoring year.

Remember that I said you’ve only got 138bhp to play with? Well, it doesn’t feel like that on the move, feeling much faster than the figures suggest. The absence of weight helps –the Mk1 Granada range weighs between 1,190 and 1,430kgs depending on specification – as does low gearing and so there is genuine fun to be had.

Weak points? The brakes are very period and you’ll struggle to beat 20mpg but otherwise it’s a brilliantly usable everyday classic; I’d hop in one for a countrywide tour in a heartbeat.

I’ll leave the final words to D.I Jack Regan: “I want the glove compartment filled with Mars bars, Wine Gums and Jelly Babies, and ham sandwiches, the sort that come in cellophane packets and sausage rolls – but no potato crisps, they interfere with transmission.”