The Lotus Esprit remained in production for 28 years, a staggering achievement. Just 10,675 were built over that time, making the Esprit a quickly-rising star on the classic car scene and a compelling choice for enthusiasts who are willing to look past its faults.

Of all the Patina’s Picks we’ve featured, the Esprit is most closely related in size, price, and performance to the Porsche 944. While the 944 evolved from the 924, the marque’s entry-level front-engine, rear-wheel-drive sports car also launched in 1976, the Esprit was conceived as the company’s ’halo’ car and unveiled just a year after Team Lotus had claimed back-to-back Formula 1 Constructor’s World Championships.

Lotus Esprit - James Bond, The Spy Who Loved Me

With strong performance, striking looks, and plenty of on-screen notoriety, the Esprit proved to the world that Lotus was capable of designing a sports car to rival the world’s best.

Riding a wave of racing success, Lotus was able to assign the styling of their new mid-engined sports car to Giorgetto Giugiaro, since voted Car Designer of the Century. First meeting in 1971, Colin Chapman gave Giugiaro free reign to design a sporty, modern, and stylish road car. Giugiaro’s work is often a series of evolutionary steps that feature basic styling ideas and a cohesive execution.

For that reason, upon closer inspection the earlier Maserati Bora road car and Boomerang concept car look like earlier versions of the Esprit.

Search For Lotus Esprit’s on Patina

That said, with a lack of history and typically curvy Italian styling cues, the Lotus gig gave Giugiaro reason to make the Esprit’s lines as ruler-straight as he wanted. As a result, the car is often described as the first to wear his ultramodern “folded paper” design language, cues that would influence everything from the DeLorean DMC-12 to BMW M1…to Volkswagen Scirocco.

For fans of design, the Esprit is notable for being one of the few cars to be redesigned twice after its introduction, with different designers building on Giugiaro’s earlier work. Like a rehashed and remixed pop song, the first to update the car was Peter Stevens, who is also known for the Jaguar XJR-15, McLaren F1, Subaru Impreza P1, and the very rare MG Power SV.

Stevens took the opportunity to soften the car’s folded paper lines, which instantly made the car look fresh enough to last from 1987 to 1993. That year, Julian Thompson—now Advanced Design Director at Jaguar—showed his changes to the Esprit, which would be its last. Softer still, the Esprit was still contemporary enough to be upgraded with a 3.5-litre twin-turbo V8 engine—a full 190 horsepower and four cylinders up on its original specification for 1976.
But don’t think that more power means a better car.

With nearly 30 years to cover, we’ve selected one flavour from each generation of Esprit. For enthusiasts, the car’s longevity and relative simplicity means that owning your very own mid-engined sports car is likely not as daunting a proposition as you may imagine.

Even though the early cars, which sport a simple 4-cylinder engine, unadorned styling, and space-age dashboard are the most pure examples of the Esprit, if you’re looking for more performance and are not afraid of the maintenance requirements of a turbocharged engine we suggest the ‘Essex’ Turbo Esprit.

The addition of a turbocharger not only pushed horsepower to 210, but dropped the car’s zero-to-60 (100 km/h) time to just 6.1 seconds, with its top speed now north of 150 mph (240 km/h). This was also James Bond’s chariot of choice in For Your Eyes Only—notably back in the era when Bond films were all about cars, stunts, and women.

The Essex incorporated improvements to the car’s driveline, chassis, aerodynamics, and interior, making this model a sought-after reminder of Lotus’ Formula 1 heritage: Essex Petroleum was the team’s major sponsor in that era. 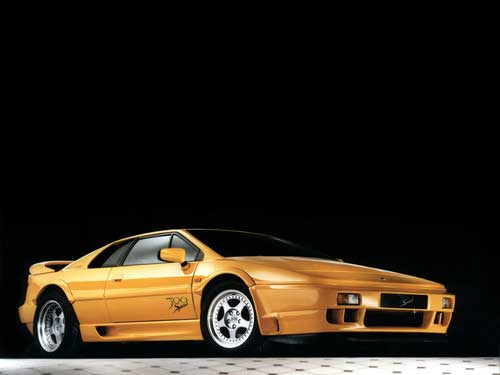 As in the past, Lotus favoured an evolutionary approach when developing the Esprit. Comprehensively refreshed for 1987, the Esprit was now one of the fastest 4-cylinder cars on the planet, with 2.2-litre turbocharged examples capable of zero-to-60 mph (100 km/h) in as little as 5.1 seconds. Of the Peter Stevens-styled Esprits, one of the most desirable is the 1989 and onward ‘SE’ Turbo model, now into the mid-4 seconds to 60 and could boast a top speed of 160 mph (260 km/h) thanks to its 264 horsepower and additional 16 ponies available on overboost.

With racing in their blood, Lotus finally mounted a factory effort with the car, entering an even faster version of the car into the IMSA Bridgestone Supercar Championship, with road versions of the race car notable for their 300 horsepower engines, beefier drivetrain, integrated roll bar, and 85 kg (175 lbs) shed from its curb weight.

Autocar Magazine put its performance on par with the Porsche 911 Turbo 3.6, saying in conclusion, “Lotus has got the level of race-derived assistance just right in the mix… Should you wish to take your Sport 300 back to the track, the racing seats are ready to accept competition harnesses and mounting points for a roll cage are fitted. Me? I’d keep it on the road. It’s the best Esprit yet.” 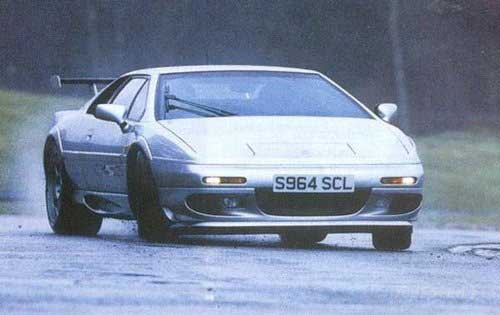 Continuing the theme of ultimate versions of the Esprit, the Sport 350 is the fastest-ever Esprit road car, with an immense 350 horsepower from its turbocharged V8 engine. It chassis was the most sorted, Lotus endowed it with a new aerodynamics package (including carbon fibre rear wing!), AP Racing brakes, stiffer suspension, and upgraded engine computer.

Still one of the lighter supercars in its class, the car was now competing against mid-engined Ferraris and could boast a zero-to-100 mph (160 km/h) time of less than 10 seconds. For the driver who wants the ultimate Esprit, just 50 were made—some patience in finding one to your liking may be necessary. If you can’t score a Sport 350, both the 4-cylinder Esprit GT3 and V8 GT models offer enough performance to delight all but the biggest speed freaks. 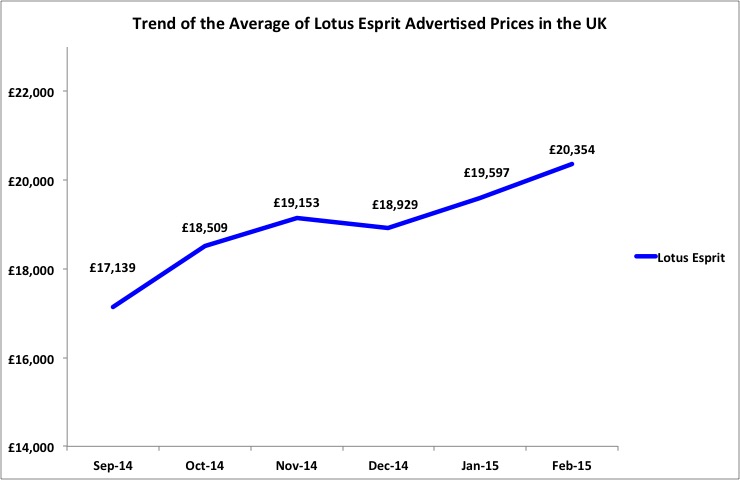 As can be expected for a low volume British design icon, the markets have started to take notice of the Lotus Esprit with prices climbing rapidly. Later cars tend to cost more but even the earliest models are now starting to be viewed in the same way as early 911s – the first version of a design icon. Buy whilst they are still in reach…

With Ferrari and Porsche levels of performance, in most respects the Esprit is a less expensive car to maintain than its near-supercar peers. Based on the comments on espritfactfile.com and lotusespritworld.com parts are relatively expensive and the best advice in finding your own Esprit is to do your homework and wait for a well-maintained example that hasn’t been through too many owners.

The good news is that most maintenance on the car can be completed by a patient and capable home mechanic, for all but the most involved jobs.

On the Internet Movie Car Database (imcdb.org), the Esprit is listed as featured in an incredible 97 separate productions. Our favourite is its appearance in Pretty Woman, where Richard Gere’s inability to drive his own sports car leads to Julia Roberts taking charge—a nice change from seeing women relegated to the passenger seat in most films.